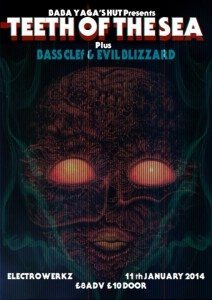 Woohoo, the Christmas gig outage has come to an end and we’re being treated to the next chapter from the consistently awesome promoter Baba Yaga. They say January is a quiet time for gigs, not that you’d know as Electrowerkz is absolutely pumping and there’s a definite glow in the room about witnessing  Teeth of the Sea’s biggest ever headline show. I had never actually been to Electrowerkz before, it’s a pretty cool space... nice and grotty and I’m guessing definitively hosts cyber military goth nights. Perfect!

First up was Manchester’s Evil Blizzard. This band is comprised of four bassists and a singing drummer wearing some of the creepiest masks you have ever seen in your life and judging by what they were wearing must have been kicked through a charity shop. They tear into ‘Sacrifice’ which is enticingly hypnotic and sent half the crowd into a bobbing of the head frenzy and the other half completely terrified. The set continues and by the time ‘Slimy Creatures’ is filling our ears it’s out and out chaos. The creepy old man member of the band is running around the audience with a homemade looking theremin in the shape of a doll’s head which everyone is having a go on and crowd members seem to be getting up and playing bass. They seemed to know the song too, were half the audience in the band? Is this a conspiracy? Every now and again you’d spot a new mask too, were they swapping them or just completely different band members turning up a bit late? What the fuck is going on??? From what I've said it might be easy to assume Evil Blizzard are a novelty act but this far from the case. There is real power and originality behind their music, imagine Butthole Surfers were the house band in your nightmares. Keep your eye on these terrifying chaps, they are going to take us to strange places for many years to come.

Next up was Bass Clef. He plays quirky kind of techno music and is armed with all kinds of gizmos to throw into his mixing bowl. He’s extremely talented even throwing a trombone into his swirl of beats making all kinds of impressive loops but I could not quite get into it. Whilst I appreciate he’s extremely talented and seems to be pushing boundaries I’m a bit rocker so it’s hard for me to comment on someone DJing. Having said that, sections of the crowd were well into it and there were all kinds of shapes being thrown but it’s just not my kind of thing.

Next up we have Teeth of Sea and it’s absolutely rammed with rumours of the gig selling out. They are getting massive and with their best and most inventive album Master being released late last year, things don’t seem to be slowing down any time soon. Album opener ‘Leder’ blasts out and there were cheers from the audience as we knew we’re going to be assaulted with the new material straight away. ‘Reaper’ takes off and we’re in sonic kraut heaven. The visuals are absolutely incredible, all kinds of lasers mad projections floating around the arena which reduces the audience into dropped jaw dancing fools. It seriously looked amazing, some budget must have gone into that.

Matt is attacking his kit like a mad man who’s drunk 6 cans of K Cider and the energy levels from the rest of the chaps was also incredible.  A ferocious level of intensity as they pummel their instruments which they frequently switch, don’t you just wish you were that talented? The set-list was perfect, going from minimal cliff hangers to epic space rock in a blink of an eye. To finish they went from ‘A.C.R.O.N.YM’ to ‘Responder’ which is like going on a trans-dimensional voyage and returning to earth to find out the world’s ended but a few people don’t care and are having a disco.

When that faded out the room went absolutely insane and the band looked genuinely shocked and humbled as everyone screamed for more. Just like anyone would if they had played the best gig of their life. The only problem is we've peaked far too soon, how the fuck is anyone else going to top that in 2014?