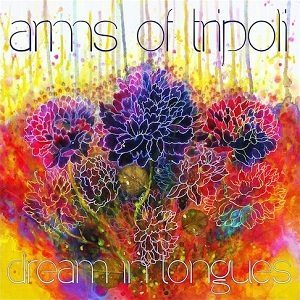 Arms Of Tripoli is an instrumental rock band from Los Angeles, California that started making music in 2011 and released their debut EP, All the Fallen Embers, in October 2012 through Fluttery Records. The band is composed by George Tseng, Jaime Galvez, Michael Bouvet, Robert Bauwens and Vic Lazar. They are some kind of super-group, gathering members from various LA based bands, they also receive support from some other musicians that get involved in their music, making it solid and diverse.

Dream in Tongues is their first full length album, it includes 9 songs that picture in a marvelous way how this band's music style has evolved since their past release. Even when they will always be dubbed as Post-Rock and Math-Rock I think that their sound has reached a new level that I would like to call Timeless-Indie-Space-Rock.

Something that makes their music different from the millions of instrumental bands of this world is that besides the usage of "normal" instruments, guitar, bass and drums, AOT like to experiment with non-typical rock instrumentation, such as Vibraphone, Farfisa, Moog, Omnichord and Rhodes Piano. More important, they don't use too many synthesized elements, I think that's fantastic.

'Miniature Habitats' is the first song of this album, its composition is absolutely spectacular, the multi layered guitars provide a cinematic feel to the dynamic melody while drums, bass and vibraphone do their modest but accurate job, by the end of the song, while we hear a recording of the band's members joking around we can only feel happy to be able to hear this beautiful music. 'Velcro Thunder Fuck' is a faster song, it flows happily with the friendly sound of the vibraphone whereas the rest of the instruments build a noisy and complex rhythm. A positive atmosphere is generated by this lovely song. In 'Scraping Skies' we notice how much Arms Of Tripoli have worked in their composition techniques and here is where I can truly say that they have changed instrumental music forever, it's amazing how some hints of indie rock, powerful drumming and a bunch of notes in the Omnichord can create an astonishing and innovative song.

'Escalator Jazz' is more experimental, the guitar progressions are intense and sophisticated, maybe the best string arrangement I’ve heard in years. What I like the most in this song is that they use a Rhodes Electric Piano, its sound is magnificent; at the end of the song we hear again a short recording of them talking, they use it in a couple more songs and even when I don’t particularly like it, it doesn’t sound that bad. The vibraphone is back for the 5th track: '10th Graders Forever', where shiny guitars start slow but gain power as the song goes forward, the bass line is remarkable and the buzzing sound of the Moog just makes this more enjoyable. 'Canna' can be described as a Math-Rock song but it also has a spectacular crescendo that at the end turns into a sweet melody that makes us float.

With 'Snowed In' Arms of Tripoli show that they can make melancholic songs too, creating a reflective atmosphere. In some point of 'Addendum' a Smashing Pumpkins' song came to my mind, I guess they have been influenced by the Chicago band or maybe it was just my imagination. And again the string arrangement is amazing. 'Ahs a Vahs a Vae' is the final piece of this album and AOT decided to fill its 7 minutes with their best features, the start is slow and melancholic but its multi layered guitars change from atmospheric sounds to heavy and raw in just seconds, there is also a breathtaking crescendo that mixed with a prodigious bass line and accurate drums guide us to the end of this song and make us want to push the play button again as soon as the final notes are reached.

Arms of Tripoli found the way to put down the boundaries of the Post-Rock genre and reach a level that won't be easy to obtain for other projects; this also places them as one of the most creative instrumental bands that I have ever heard.