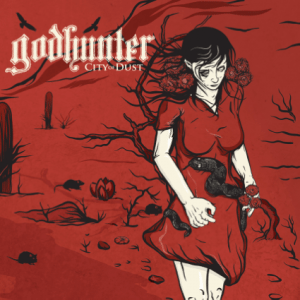 Out on February 18th through

Living in the Southern states, we have a lot of sludgy doom metal acts. What can I say? We love our beer cold, our women with big hair, and our metal heavy. Sludge metal is just that. It is as heavy as the humid hair of the bayous. It is angry as an agitated rattlesnake. It's pissed off like the desert sun.

Godhunter, a band from Tuson, Arizona is great at translating their arid environment into white hot aggression. The tracks are heavy, raw, and full of that piss and vinegar that the Southern states are known for. Let it be known that Godhunter are pissed and this album channels that aggression. This is not their first album. Their previous release titled Wolves was received with high regards and this album is in following with that well produced heaviness Godhunter is are known for.

City Of Dust is not just about being a heavy album. The lyrics on are thought provoking and political. With angry growled vocals — inlayed samples of political sound bites — backed up with fuzzed out guitars, you really feel the nihilistic tone in every word. Godhunter is angry and they use that anger in their songs. Songs about the gentrification of their city, songs about harsh wildfires due to climate change, songs of two-faced politicians.

This album is heavy as an elephant's balls. Excuse my Texas euphemisms but that is the only way to truly describe it. 'Brushfire's is a great example of this album and my favorite track. Opening with a sample of political disobedience, followed by a sweet swinging riff, leading to some heavy drums and though provoking lyrics.

The album has a little something for everyone. Enough heaviness for all your metal head friends. Enough angst ridden lyrics for your punk rock friends. The perfect album to drink a beer or your favorite rot gut whiskey and start some angst ridden change.