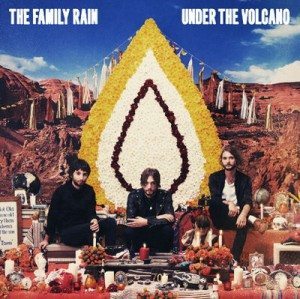 On a cold February night, The Family Rain coaxed a sizeable number of the good people of Islington out for what turned out to be an explosive evening of blues-infused rock.

Indeed, the title of their debut album, Under the Volcano, suggests a band in tune with the rhythms of Mother Nature, and so the Walter brothers proved in a visceral live performance.

The three lads from Bath were surprisingly clean in appearance, however, with no signs of lava or volcanic ash about their sharp, retro outfits.

But when the three-piece band let rip with furious torrents of finely-tuned rock ‘n roll, accompanying the joyful, throaty vocals of frontman Will Walter, a surge of excitement was felt throughout the medium-sized venue.

In contrast to the boys’ clean-cut attire, the dark, growling bassline on Reason to Die was downright filthy, thanks to Will, who doubles up as a bad-ass bass-man. By the time the la-la-la chorus kicked in, it felt like the soundtrack to a troupe of swamp monsters dancing on Howling Jimmy Jefferson’s grave. Meanwhile guitarist Ollie unleashed a whole load of West Country aggression in a thrilling solo in crowd-pleasing track Trust Me...I’m a Genius.

There was an obvious rapport between the audience and floppy-haired Will, who waved cans of Stella around and coaxed some veritable cheering at various points throughout the set. He instigated an instant sing-a-long to the catchy Don’t Waste your Time on Me, while Friction, from an early EP, won a big reaction.

Comparisons with Kings of Leon have been made by music industry types already, and at times, Will appeared to borrow heavily from Caleb Followill’s vocal drawl, particularly on album track Together.

Under the Volcano, well worth a listen, tackles some weighty issues. At turns the lyrics deal with relationship woes on Together, as well as coming to terms with masculine vulnerability –even staring death in the face on All the Best. On the basis of a superb debut and memorable performance at the Garage, The Family Rain are bound to continue winning plenty of admirers.

As for me, I’m off to chase swamp monsters round Hackney Marshes with Under the Volcano on my MP3 player.