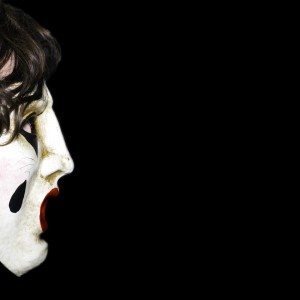 According to his official biography, “Vincent Vocoder Voice's self-titled debut album is a waking nightmare waiting to consume the UK…An experimental exploration of the solitary hell of the individual's psyche…those looking for catharsis would do well to look elsewhere - Vincent Vocoder Voice has no answers”. Hmmm…

“A waking nightmare waiting to consume the UK”? I assume this is a metaphor (!) but nonetheless it brings to mind the kind of introductions “scary” wrestlers receive before lumbering into the ring for carefully scripted “fights”. “There are no safe tracks on this album...” we are warned, “Each one will challenge the listener, and not all will come out on the other side unscathed”. Eeekk!! The album claims to capture “the second of murderous anger at being cut up at the roundabout or being handed a half-full cappuccino”. Murderous rage at a half-full cappuccino? Dark!

Despite what the band/artist/PR types might like to imagine this is not difficult listening in the sense of it being disturbing; it’s just often awfully bad. Certain tracks seem to have been written/arranged to “frighten” and/or outrage; it’s precisely this conceit that renders many almost comical. The intention – as we are constantly reminded – is to unsettle the listener by dwelling on existential dilemmas of the post-modern age; yet, worthy a goal as this might be, the strategy employed to expose our collective ennui and societal alienation lacks the subtlety necessary to enable the listener to fill in the blanks and, in so doing, identify with, inhabit and ultimately own the artist’s motif.

Surely the most effective books, films plays etc. exploring fear, hatred and isolation are those which guide the viewer towards a point from which they then – consciously or not – delve into uncomfortable areas of their own psyche. Too often here, however, the message is overt, repetitive and delivered with a lack of subtly Marilyn Manson would admire.

Opening tracks 'How Dare Anything Ever' and 'Waving Up at You From Under the Ice' are particular low points and comprise unoriginal medleys of atonal noise and self-consciously “bizarre” arrangements interspersed with vignettes of speech which are evidently intended to “disturb” or “inspire”; they don’t. But then 'A Cuntful of Wishes' follows; it’s arguably the best song on the album and displays exactly the kind of subtle, unsettling reflections that most of the album lacks. Yet it’s followed by 'The Concrete Cancer' a turgid triumph of pomposity…

The album is liberally peppered with references to disease and resentments but this tsunami of the unpleasant becomes self-defeating as the blatant horror becomes formulaic and contrived. Genuinely goods songs like 'The Unbearable Heaviness of Having' and 'The Slow-Creeping Cacophony of Compromise' lose much of their impact when surrounded by so much clunky imagery and crass social commentary. Interesting turns of phrase and imagery are too often buried under layers of monotonous, unlovable noise – such as on 'Superhappy Adventure Time' in particular. No doubt “making the listener work for it” is intentional, but Christ, really how difficult is it to make unpleasant sounds?

With savage editing there is a decent four song EP buried here though all too often this is imitation Nine Inch Nails without the menace and 'Holy Bible' Manic Street Preachers without the honesty and just too much vacuous, senseless noise.

As it stands most of this album will appeal largely to the kind of people who’ve memorised Satre’s Wikipedia page, equate silence with enigma, morbidity with existential angst, and who bore the shit out of anyone who comes near them.