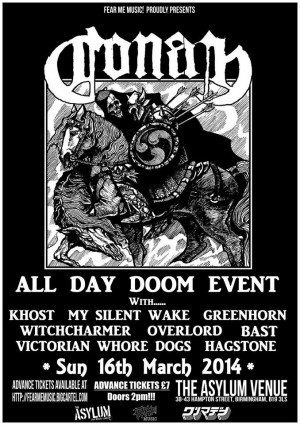 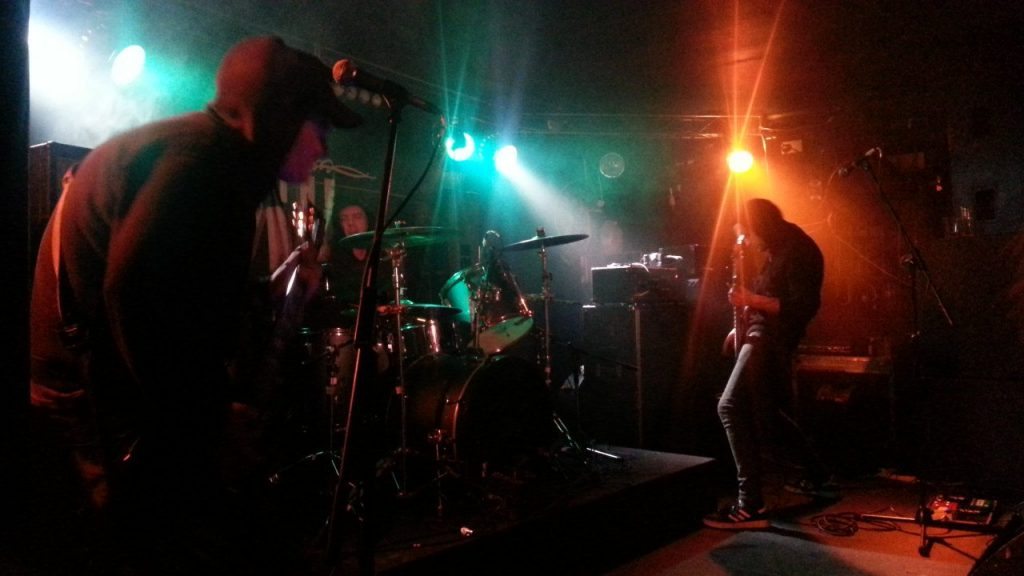 If you've been to the Asylum in Birmingham, you'll know the place is a fucking sauna. Deep in the bowels of Birmingham, is it the best environment for doom, or even the best place for fifty sweaty, beardy men to be at one time? Alas no, it's not. I arrived midway through Hagstone's set, whose brand of muscular, riffy doom rock, was complemented nicely by the occasional blastbeat. Would I pay to see them play again? No, but I would be interested in hearing them in a couple of years, when the obvious Wino-era St. Vitus influence turns itself into something more substantial, and unique. Talking of unique, Victorian Whore Dogs were immediately engaging, with their giant vocalist making sure to get close and sweaty with the crowd. He also won the prize for best t-shirt of the night, a Dismemberment tee with "Behead those who insult slam" printed on the back. They offered a theatrical brand of dirty, grinding doom with a sense of glee and joy in being as offensive as possible. I even made out a Terminator quote in one song. That, combined with twerking, top-notch stage banter and finishing with two songs that felt like a heavier Envy, made for an early highlight. Awesome.

In the lull after they pack up their stuff, it becomes blindingly, painfully clear that everyone is here for Conan. You can see it in their eyes, and on the myriad shirts through the crowd. When the vocalist for Victorian Whore Dogs points out that he doesn't even think Conan are here yet, a palpable sense of disappointment runs through the room. It fell to Geordie power groovers Witchcharmer to pick up the baton, who do so while sounding exactly like a female fronted Kyuss, which is no bad thing. The triple vocal attack with second guitarist & drummer is an inventive touch, even if the interplay between the voices sounds a bit Lacuna Coil-y at times. They do provide intricate riffs and tons of swagger, but very minimal stage presence. Their occasional spacey interludes and epic song lengths probably justify inclusion in a day of doom - "I Am The Fire" and "Born A Slave" rattled along pleasantly enough. They have good songs, but nothing outstanding, although this could be due to having to follow Victorian Whore Dogs. I will say this though: Witchcharmer would be ten times better if they went a little doomier, and took everything much more slowly. They were followed by Greenhorn, whose bass heavy throb shows a good ear for pacing and atmosphere, even though their singer is posessed of the strangest vocal of the night - a really breathy black metal-ish scream that doesn't carry very well. I bet it sounds killer on record though. They do have a phenomenal drummer, who administers well-placed blast beats, and "Kingdom by the Sea" is so doom it hurts, like wading through sludge. Their sound is utter misery, and they get big kudos for overall dedication to the sound. I don't think anyone has ever played that many triads and lived to tell the tale.

Now, if you're bringing a laptop on stage with you at a doom festival, you better have some big fucking balls to justify it, and Khost got lucky. Normally you'd think "guitar duo with laptop? Fuck off", but their atmospheric orchestral industrial doom (clumsy but accurate) is crushingly heavy. They just sounded plain evil, there's no other word - two sixes in search of a third. Where the other bands failed to draw the crowd forward, Khost managed it with no crowd interaction whatsoever - no banter, no lights, no eye contact, and they were phenomenal. You might think it all sounds a bit po-faced, and I suppose it was a bit, but they didn't half do a good job of rumbling a belly full of Newcy Brown. My only issue was the pre-programmed biscuit tin drums - I'd love to hear them without any percussion at all, but that might push their sound to breaking point. Imagine Justin Broadrick meets Stephen O' Malley and you're most of the way there.  Next up were My Silent Wake, who started off with some tasty blackened hardcore, like the stuff Southern Lord is putting out at the moment. Much better than their awful name would suggest. They were formed by Midlands doom pioneer Ian Arkley with Martin Bowes of Coventry goth outfit Attrition on glitchy noises.

As My Silent Wake finish and pack up Conan's huge speakers arrive, causing much excitement amongst the roadies. They're huge, and the entire stage is reconfigured around them. First up to use them is current Conan tour support Bast, a three piece Kingston-based doom/black metal band. Think Sleep meets Wolves in the Throne Room - when they get fast, they get really fucking fast, and their bedreadlocked drummer is a fucking machine. For such a young band they come across as a lot more focussed than you'd expect, and they make sounding this heavy look effortless. In the slower bits there's a definite earth influences, both early and late-period - chiming open chords mixing with crushing barres as it cranks back up again. They're really heavy, but such a tight unit, and excellent musicians. By the time they let rip as their set comes to a close it's all a hair's breadth from falling apart, but sounded all the better for it. A chaotic, joyous, and above all heavy racket.

By the time Scouse scene heroes, the mighty Conan - the prefix "mighty" is required in all Conan reviews - get on stage, anticipation is high. Can they be as good as they sound on record? Can they be as heavy as everyone says? Suffice to say, they sound incredible. Can you worship tone? The mammoth sound that Jon Davis creates from six strings, a T-shaped headstock and a wealth of chrome is simply out of this world. My bowels have never collapsed before, but then I've never seen Conan before. They didn't collapse.

Their sound works better live than on record, which I suppose is the point of this whole genre - you can't listen to one Conan song and get to the nub of what they are. Their albums are just a blueprint of the sound that they create on stage. It's all about the experience - seeing them with their hoods up even though it's sweltering hot inside, riff after almighty riff plunging deep into your stomach. Current hit single "Foehammer" sounds like the end of the fucking world through those new cabs, and I thought my heart would explode once it got going. In fact, the sheer girth of tone is such that in parts it sounds like a foghorn. I see a guy at the back with his fingers in his ears, which is impressive after Bast's performance. They're so loud, so powerful, the music is so simple but devastatingly effective.