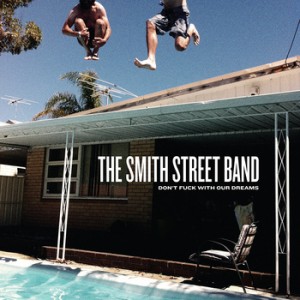 I’d spent the last 2 nights of this weekend seeing Nine Inch Nails & Queens Of The Stone Age and I can genuinely say that I was more excited for this gig, and for good reason. Sometimes when you go to see a band you can feel a palpable ‘something’ in the air that is generated sometimes by the band, and sometimes by the fans. This night was both. The Corner is a Melbourne institution that has had many, many sublime acts grace its stage but it’s been a while since I’ve seen a band sell out a gig there.

Smith Street Band sold out two. And could have sold out more if they’d had more time on this tour. This is a Melbourne band that has reached ‘adoration’ status in a short period of time and it’s very, very clear why. It’s been a while since I’ve been to a show with so many punters singing along to every word, cheesy grins abounding, beer flowing and bodies flying everywhere. If I could bottle a moment of Melbourne/Australian music to show to international punters I’d be hard pressed to go past this one – sublime, honest and real.

And you know what? NO ONE was happier to be there than them. That ethereal, valuable quality that so many bands seem to lack these days, being too cool to care or pretending that they’re not insanely lucky doing what they love? Not here. The boys were smiling more than the crowd, and genuinely thankful to have this opportunity. Wil told a heart warming story of when he was a schoolkid passing The Corner and imagining how cool it would be to play a show there…..

And now they are. And that’s so fitting, because they deserve it. I could wax lyrical for days about this band (firmly smitten here), but I’ll begin and end with this: this band are the best slice of Australiana I’ve heard, with some of the most personal, delicate and flat out honest lyrics about life, love, loss and growing up. Or not growing up. Wil’s distinctive vocal delivery lends itself to a troubadour style, and the band embrace this, yet give it a rock/punk edge that counterpoints the delicate nature of the words. Just about every song has a line that flat out kills me, forcing introspection, reflection and musings on my own situation, hopes, dreams and desires.

So there was sweat dripping off the roof, bodies crushed together and beer in plastic pots being spilt everywhere and not a single person gave a shit – check your ego at the door. Every song was an exercise in crowd singalong, with the chorus and buildup of ‘Don’t Fuck With Our Dreams’ simply goosebump inducing. Hearing a full venue scream out ‘We know what happened we were there’ would convert anyone to this group, I swear to Odin, and the bittersweet lyrics of ‘Young Drunk’ resonate with anyone that’s stumbled down a suburban street as the sun begins to rise, knowing that they’ve kept their evening promise of drinking away their problems with friends.

And that’s what this band is about – life affirming music. Even in the depths of their saddest moments they somehow manage to remind you that it’s all going to be ok… and I love that. And live was even better. I got to see one of the most Melbourne bands, in one of the most Melbourne venues, and I’m incredibly spoilt and lucky to have been able to see that. And I want to see them every night. EVERY NIGHT.

Now, I request everyone who likes a bit of a singalong to go and listen to this – you’re welcome.