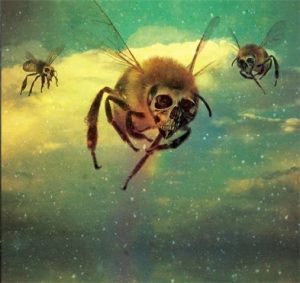 The three piece peddle a down-tuned heavier-than-shit blend of grunge, metal and post-hardcore that’s difficult to categorise beyond the overly generic 'noisecore'; there’s elements of Slint, Queens of the Stone Age, Helmet, And So I Watch You From Afar, TAD, Big Black and the heavy sludge of Black Flag’s 'My War'. The key elements are monstrous riffs and some of the hardest drumming you’ll hear.

The album explodes into life with 'In My Suit'; it sounds like a screaming maniac riding a volley of missiles through a sheet metal factory. 'Death Clouds' is a menacing promise of airborne carnage; if locusts listen to music then this will become their 'Ride of the Valkyries'.

'Belladonna' is the best example of the band’s diverse influences; it’s a savage mix of hardcore, grunge and stoner metal overlaid with a burst of shearing vocals. 'Fight Milk' is pure sonic aggression; sweeping feedback combines with primeval riffs and Gatling-gun drums to foment a sound which just pummels the senses. '123456789'reminded me of the brilliance of early Therapy? and it’s the most obviously punk-orientated number; that said about a minute and half in, the song seems to suffer a cardiac arrest and lurches into a heavy staccato. 'A New Low' is distilled aural confrontation; a fitting closing track that rings long in the ears.

Whitedevilwhitedevil are about as concerned with commercial appeal as a shit-caked hippo (and just as heavy) but the fantastic album artwork – by guitarist James Boast – is another reason to buy a copy of A New Low. This album bristles with a unique fury that manages to be witheringly heavy without ever becoming formulaic or neanderthal and it’s an inspiring reminder of how music can quicken the pulse.