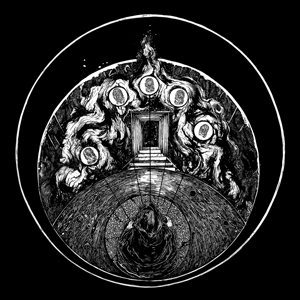 Spring time in Texas is really not a kvlt time. It's hard to think about the dark black voids of evil when you are melting faster then your ice cream and wonderful wildflowers are blossoming every where. However, sitting in my house with the shades drawn tight and the air conditioning on blast, I am able to imagine icy landscapes of permafrost and once again summon the kvlt elders from below. Spring time also means late night long bike rides and spooky midnight adventures. Paramnesia really helped with the imagery and sets the mood for these times, their self-titled and first full-length album is 40 minutes of dense hollowing sound.

Their album starts with a foreboding intro and erupts into a black of raw dark emotions. While the band hails from France, they fit right into the Cascadian Black Metal sound from the Pacific Northwest of the United States. For a longer album, it transitions smoothly and envelops the listener in epic soundscapes; pausing at moments to slow into melancholy drones or deep running drum beats over laid by modulating guitars. Usually a lot of long albums fail in keeping the listener attentive to the music; Paramnesia however, is filled with atmosphere and aphotic dissonance which keeps you attentive.

I really enjoy the Cascadian Black Metal sound. It is as dark and immense as the forests of the Pacific Northwest; haunting and beautiful. I really enjoy black metal album that is not forced into a normalcy. Paramnesia doesn’t force the tracks with splitting them up, but seems on this album, focused more on the emotion of the music and the flow. They let the sounds go where they need, wild and free, even more so that they don't even name their songs. Really, that is the sound of Cascadian Black Metal, a wild untamed atmosphere just like the mountain and forest. Paramnesia captures the wildness, the dark, the somber mood.

I have listened to this album over three times and it is something new every time. I pick up on more time changes, the fade in and out of the guitar work. This is a really well put together album. Paramnesia really took their time to pour a lot of musicianship and feeling into this album. If you are a fan of atmospheric black metal I highly recommend you pick up this album. You wont be disappointed.