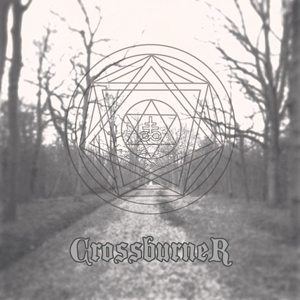 I really couldn't find much on this band, their Facebook page states this band has been playing since 2013. “Taking influence from the early 90's swedish death metal scene and mixing it with aggressive speed of 80's UK punk and hardcore, the sound is abusive and bleak. Expect buzz saw guitar tones, d-beat onslaught and lyrical content that covers a range of topics from personal struggles to the Occult.”

Signed on Footloose Records, Crossburner's self titled album can only be summed up in one word....ANGRY AS HELL!

The first track rips your ears a new one with a barrage of drums and heavily distorted guitar. A real massive mix of blackened hardcore punk. These English guys are really angry at something, with tracks like 'Burn The Saint', 'Chaos Reigns', and my favorite 'Wet Mary' - which has a slow grinding break, like a dark decent into a blasphemous dimension. This band really turns up the fury to over 9000. The songs are short and sweet with layers and layers of melodic distorted guitars, violent drumming, and of course very very profane screams of deafening blasphemy.

Crossburner is a metal battery, it's also dark and sludgy at moments. Like a slow twisting knife wound to the gut. Crossburner will likely quench a metalhead and hardcore kid's thirst for heavy ripping music. I really like the cross genre and they really do it well, with black metal influence and hardcore cadence. They have interesting breaks and really keep a annihilating tempo, with some really brutal drumming. Their guitar riffs, at times, sound like old school Swedish black metal thrash. I think the only thing bad about this album is how short it is. But we all can't be greedy.

Crossburner according to their Facebook is currently doing shows around England. I would imagine their live shows to be great just based on the amount of energy they output on this album. I would recommend checking them out and finding this release out on CD and vinyl for your listening pleasure.