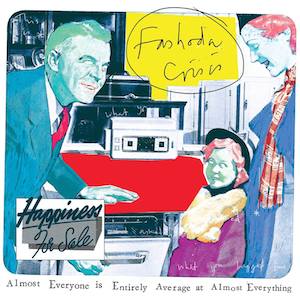 First and foremost, Fashoda Crisis don’t sound like System Of A Down (long story - Ed.). They never did, and they never will. What they sound like is an alternative soundtrack to a mashup of Clockwork Orange and  Nineteen Eighty-Four, and they’re exhilarating.

As with Fashoda Crisis’ previous album, Him Make They Learn Read, the centrepiece here is Sim’s lyrics; biting social satire delivered through the mind of a lunatic. ‘Amnesiac Electorate’ opens the album, chastising us for walking headfirst into a bastard Tory government;

“Amnesiac electorate as we walk through the valley of the shadow of death, forgive us our trespasses and deliver us from Jeremy Hunt”

“Hey Pauper! Why don’t you eat your children, like animals do?”

This is the social commentary we deserve; biting, sarcastic, accusatory. As I type this, UKIP have just increased their presence in UK politics, social apathy and the worst form of xenophia have led to our society being nasty and jaded. These same little-Englanders come in for a beating in ‘Orwell’, ending with a bellowed;

“This is what you wanted. What you asked for. What you begged for.”

“Fuck you all”, Sim is saying. Fuck your narrow minded bullshit, your insular lives, your refusal to partake in your community. We got what we deserved. In the end, Sim’s response is surprisingly measured.

All of this unhinged rage is perfectly framed by Matt’s viscous, oozing bass and Simon battering the drums like a man possessed. Discordant noise, coalescing into something insane, something oddly beautiful.

Or, in the words of my girlfriend, “It’s all just shouting.”