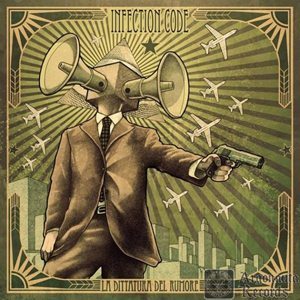 Released on June 2nd through

Italian quartet Infection Code is back with their fifth album and if you are ready for a great ride among pursuing walls of sounds made by heavy guitar riffs, noises and psychedelic spirals, La Dittatura Del Rumore is exactly what you need.

The Alessandria, north of Italy, based band have been producing music since 1999 when they jumped into the post-metal/noise-core music scene with their debut H.I.V. 999 that definitely left everybody surprised for its originality and strength. In the last years the band has shared the stage with bands like Cult of Luna, The Ocean, Ufomammut, Zeni Geva and has recorded with Billy Anderson (Melvins, EyeHateGod) and Eraldo Bernocchi (musician and producer, collaborations with Mick Harris, Thee Maldoror Kollective and Ephel Duath, among others). From their debut the band have been evolving till landing to this last record that provides further proof of their talent.

La Dittatura Del Rumore, that will be released via the Italian label Argonauta Records in June 2014, is a massive step up. The production has been improved dramatically given the guitars are much thicker and more well-rounded edge. The songs themselves have now a much stronger sense of urgency and purpose. I appreciate the flow through the 7 movements of the album with each transition being a natural evolution and all of the songs coming together to form one cohesive package. One thing becomes clear when listening to La Dittatura Del Rumore is that you’ll notice that Infection Code have been very consistent throughout.

There’s an evident Godflesh and Through Silver in Blood of Neurosis vibe running throughout the album with the really thick and dismal melodies and the harshly yelled vocals. The guitars never play anything outwardly melodic but are instead used primarily for texture. The driving bass and militaristic, tribal drum patterns serve as solid backdrops to the endless wash of droning guitars and anguished vocals. It’s a great mix.

The album opens with the relatively soft ‘Miasma’ that soon explodes in the rushing tracks ‘Lottacontinua’ and ‘Vuotavertigine’. The album moves and there’s no rest, seeming like it is literally crossing a post-apocalyptic world, unsure of what one may encounter, with an eerie feeling of being watched. I found sort of a hope in the form of ‘Maledesistere’, wherein it seems that one is not alone after all, followed by the psychedelic journey of ‘Profondopiomborosso’, ‘Ilsensodellacondanna’ and ‘Omniasuntcommunia’. These three songs together are a final show of (destructive) power.

Listen and be swept away.