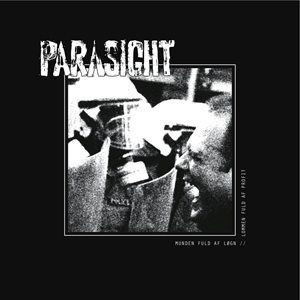 Ah, crust punk. I have a soft spot for crust punk, back in my younger days of raising hell and riding my bmx, crust punk was the thing to listen to. Also coming up as a young extreme metal head, crust punks always found themselves in the same shows. I always liked that cross over and made a lot of friends who were into the crust scene. Still today you can see that influence in some bands mixing death metal and black metal with crust punk beats, music stylings, and the DIY attitude.

Parasight, a four piece Danish band – you know it's going to be rocking when they are from Europe - are bringing out the anger an fury on their full length release Munden Fuld Af Løgn, Lommen Fuld Af Profit, which translates to "Mouth Full of Lies, Pockets Full of Profit", awesome.

Right off the bat this album fires on all punk cylinders, hitting you with a large crunchy intro into a full d-beat assault. Like most punk albums these tracks average to two and a half minutes of angst and protest. The vocal stylings keep up with the tradition of hardcore punk and scream righteous youthful rage in your face. The guitars are a crunchy but surprisingly clean, melodic, and really have a great presence with not being to over bearing. Some punk bands just like to be loud to be loud, but Parasight knows when to turn it up to 11 and when not to. The drumming and bass hit at the right moments and really keep the pace, together it all makes a perfect soundtrack for when you are smashing bricks through the super mega corporation's window!

This album really rocks out, it gets a little away from the original crust punk in some of the latter tracks, 'Inet Hab, Intet Liv' is a prime example with a little chug chuggy off tempo riff, but still remains to be a great punk song. While the album is all in Danish, its hard to get what the album is about. One thing I do like about crust albums is their stance and overall theme. Sometimes while listening to an album you see the prospective of the band and what they are angry about. Sometimes you learn a little something! But these rockers keep it true and sing in their native language, no selling out for us 'Mericans.

Parasight is a great band, Munden Fuld Af Løgn, Lommen Fuld Af Profit is a great album, well produced and rocking. Parasight is currently on tour in Europe but it would be great to see them come to the states. That is one thing, angst ridden extreme punk rock will translate well where ever there are angry youth. It's great to hear bands that are still keeping punk rock dangerous and insightful.