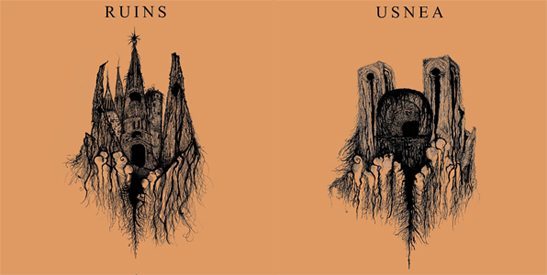 Out on June 3rd through Halo of Flies

Splits are always a tease of music. You get to listen to two bands, usually their best songs or songs which were to awesome to be a full release or EP.

Two bands come together for one awesome release. Usnea from Portland with their heavily laden soul crushing doom metal and Ruins from Germany with their fast paced blasphemous crust punk. Both these bands bring two tracks which highlight some of their style in their prospective genres and lay out a tease of what they are about.

Ruins kicks off this 7 inch with a haunting track, its cadence is slow to start but then picks up with the old familiar d-beat drumming which we have grown to love. The track 'Discrimen' really shows what Ruins is about. Anger, rage, with controlled quiet darkness. The guitars in distorted harmony, bring an almost somber emotional feel to the track. I would say the only thing about this track is it seems a little held back. I would have really liked it Ruins would have unleashed a little more fury, some of their other tracks I have heard, not on the release, were more high tempo angry crust while 'Discrimen' was a little soft and the guitar, while awesome, it was not what I was expecting. However, the track did make me interested in hearing more from the band, and I guess that is what a split is about.

Usnea, however, brought the release up. Their soul crushing heaviness and dark murky doom is just epic. The track 'Only The End Of The World' opens with an eerie ring and breaks into an massive almost drowning guitar riff. This is what a split is really about! Usnea really shows why they are at the top of the sludgy doom metal genre. Black sicking distorted guitar, deathly growling, and monster sounding drums. Like a monstrous plague giant, this sound tramples through a dead landscape of sound and kills your ears with blasphemous screams. The only bad thing I can say about this track is it ends too soon. At only six minutes, I wish it went on for six more!

Both Usnea and Ruins are on tour now, Ruins only touring in Europe at the moment, but I do recommend if you get a chance to see any one of these bands, do it and support the music you like.