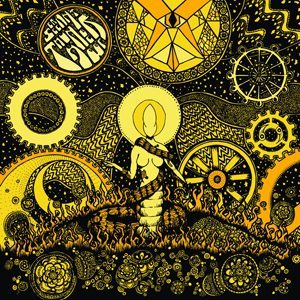 According to the band, Sergeant Thunderhoof started life as an excuse for friends to get together to jam some “tasty licks”. Fortunately for you and the rest of the world with ears and musical taste this group of friends decided that this jam project was worth forming into a band. You may thank whatever deity you believe in for this because on Zigurat, The Hoof (as I shall from now on call them) have laid down 5 tracks of sublime groove and grit.

The release opens with the glorious foot-stomper of track ‘Devil Whore’. Its main riff feature a winding riff that slips into your ear, burrows into your brain and refuses to vacate. Squatter’s rights so it says. It also features a great example of note choice when the riff descends down to a note that is lower than a skateboarder’s belt, rattling your fillings and shaking your bowels it only serves to sound heavier when the band venture up the higher notes. ‘Pity For The Son’ opens with a dreamy melody that shimmers like sequins, washing over you until a full stop drum fill and the band kicking things up 87 gears.

‘Om Asato Ma Sadgamaya’ cackles its way into existence with a vibe that reminds me of the better moments on the Down II album. It’s chock full of groove and some wonderful vocals (something that is not limited to this song mind you....). There’s an effect laid over the vocals at the end of the track that in the wrong hands would drive you to violence but here it works, its juddering nature fitting perfectly over the riffage beneath. ‘Lunar Worship’ starts off all mean and meaty, riffing back and forth but with an deft display of dynamics, the last 6 minutes of the song follow a much more laid back vibe. EP closer ‘After Burner’ combines all the elements that have preceded it from stunning vocals to laid back grooves to intensity and riffs. Lovely stuff.

I could be lazy and throw out names like Black Sabbath, Kyuss, Monster Magnet and so on to try help get across the sound of this band and whilst that would be on the money, The Hoof are so much more than stoner/doom rock. They blend a wonderful space-y vibe into tracks that surprise and delight.  The aforementioned ending for ‘Lunar Worship’ for example has much more in common with 'Shine On You Crazy Diamond'/'Set The Controls for the Heart of the Sun' than it does with 'One Inch Man'. The vocals on this album are also worthy of high praise. Where the band could have gone either all-Ozzy or all-Pete Steele they’ve gone more melodic with vocal lines that you can sing along to; that work perfectly with the bowel-crunching riffs that lay beneath it. Thankfully the band have also realised that they need to keep things interesting and so instead of playing the same riff at the same temp over and over again there are enough twists and turns in each song to kept you tapping your foot and wondering what’s coming next.

This is an unbelievably excellent debut release. One that you will never tire of and just to make it that little bit sweeter you can download the entire thing for FREE at the band’s Bandcamp page. You can’t say fairer than that really. So even if you don’t like it – it cost you nothing. Although I’m pretty confident that you, like me, will love this EP.