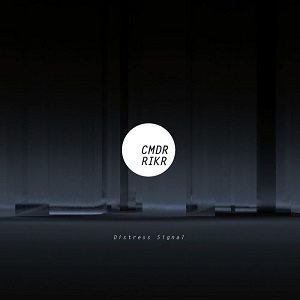 CMDR RIKR is an Instrumental Post-Rock band from Oldenburg, Germany that  is composed by Christof, Christoffer, Justin and Udbert, they started making music in 2011 but it wasn't until March 2013 that they finally completed their lineup and decided to set up some digital recording equipment in their rehearsal room and record the 7 songs that they had written until then. The result was so good that they decided to take the best songs and release a record.

Distress Signal is their first album, in this effort we find 5 passionate songs that create relaxing atmospheres and are accompanied by backdrop videos in their live performances. Its sound is mostly slow and incorporates elements of stoner rock, doom, ambient, progressive, post-rock and jazz. While listening to these melodies you can lie down, close your eyes, relax and create your own mental movie with this wonderful soundtrack.

The opening piece is 'Distress Signal', a 14 minutes track that starts with sounds of distorted guitars that set up the atmosphere for a slow and pretty song, it never increases its speed but as they use raw guitars, synthesized sounds and a magnetic drum rhythm we can easily get immersed in it. Something that I really liked is that they used a sampled line of the Star Trek series; it fits perfectly in the mood of the song and the thematic of the album, just fantastic. The second Track is 'Chlor', it begins with a piano sequence that kindly increases its tempo as the other instruments get involved, the bass line is remarkable, in general all the strings' arrangements are amazing.

'Orbiting a Moving Target' is a more melodic song, its core is a guitar chord that is accompanied by some electric noises played over and over again until the piano interferes and changes the rhythm, in the moment that the rest of the instruments join in they all get louder and in the end we hear how the friendly core chord closes this brilliant song. In Erbarmen we hear a short speech in german that honestly I don’t know what it says, in the background the sound of sea waves helps us relax and enjoy this track that for a little more than 8 minutes shows us that this band really knows how to create beautiful soundscapes and mix them with powerful rhythms. The final piece is 'New York', their first promotional single. Post-Rock in its best shape, it’s explosive and sweet; again the bass line is fantastic, definitely my favorite song of this album.

Distress Signal was released digitally and on CD via the German independent label Data File Music on March 28th. The vinyl was delayed until May 2nd, that same day CMDR RIKR celebrated its release with a half-secret outdoor show at an abandoned landfill and incorporated new audio-visual material.