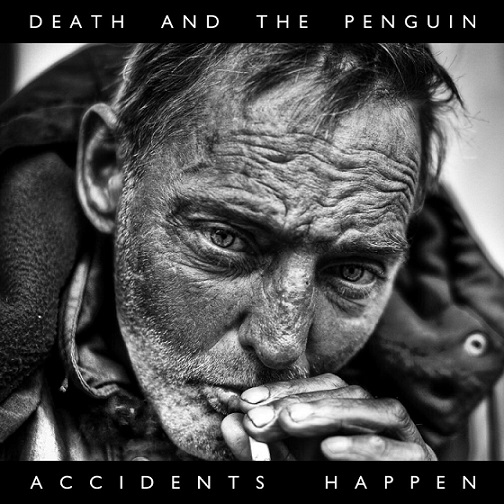 Death And The Penguin

Take Elbow and The Young Knives, put them in a confined room with The Mars Volta and CKY, and you would possibly find something that resembles ‘Death and the Penguin’. Active since 2013, this 4 piece alternative indie group hailing from London have just released their debut EP ‘Accidents Happen’.  Although I wouldn’t normally like to give too many comparisons with other high profile bands, it’s apparent there are lots of influences and elements within their latest release that is hard to not shy away from.

The band have been plugging away for the release of their new EP which seems to me to be a very solid start to what will hopefully be a long music career for these talented musicians. I have to say that maybe not always in staying within a particular genre, in retrospect what these guys do offer is something rather unique and not ‘just another indie band.’ Because of the elements that have been drafted into ‘Accidents Happen’, every song takes on a different shape or format that I can quite happily sit and listen to, because every song has been made to be interesting. Take the opening track ‘Snuffed Out’ for example, we are introduced to a no nonsense start and introduction to the band. The song has a lot of indie hallmarks with some hard hitting rock paths that are explored later in the song. It’s a solid start and sets precedence for the remaining.

The EP really begins to become more interesting though from track 2 onwards as the band begin to show some nice grunge and technical ability in ‘Space 1998’ whilst keeping within their unique environment. ‘Strange Times’, their first released single is very reminiscent of something from The Young Knives in terms of how the vocals have been arranged and the overall production of music. Fitting this element into the genres already present is pleasing to the ears. You begin to feel a sense of the EP building up into something much more than how it is first perceived. ‘Bitumen’ again has a big focus on vocal arrangement, and here fans of Elbow will be listening in attentively. Although for me, the game changer is the off beats and the almost feel of an old CKY track poking its guitar arrangement through, it marries so well, I’m hooked on it as I can’t recollect hearing all of these shining attributes ever being put together.

On reflection I can hear lots of things in Death and the Penguin’s music, but feel that listing them all takes away from the hard work put into the EP from these talented chaps. The production is great too, something that is sometimes overlooked as we enter a new era of recording. These guys have done it all the right way, stuck to writing something that is definitely different to what is around at the moment and you have to appreciate that. I can’t see me forgetting about this band in a hurry, and I’ll certainly be recommending it and following them on what will hopefully be a great journey.