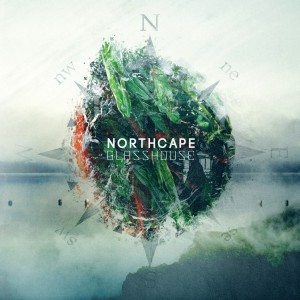 Something about Northcapes’s new EP attracted me to it before hearing it and sometimes you just know that everything is about to just fit into place. I saw the album cover and title for the new EP some months back and was astonished by the sheer beauty of it. That was me hooked instantaneously. The cleverness of textures and stunning colour’s that provide the central and faint compass outlines have you staring in wonderment and finding new gems within the artwork.

For those of you who are unfamiliar with Northcape, you may wish to know who the musical genius is behind these melodic, down-tempo ambient sounds. Alastair Brown has been releasing music since 2003. The focus of his work is not complexity, but of expressing his own characteristics within uncomplicated melodies and minimal beats. The cross over of ambience and IDM that he brings under Northcape is surprisingly original and individual.

As for Glasshouse the music, disappointment was never going to be on the agenda. ‘Capillary Action’ opens up the EP in such a blissful way, it’s the first track I go to at the start of my current daily commute. The superlative melody and bass line within the 5 minutes that encompasses this song is so comforting and clever, I find myself swept away.  The album title track ‘Glasshouse’ follows on in a way filled with anticipation and more minimal beats with seductive simple bass notes. The smooth textures feel like they are evolving from an electric piano, simplicity has never sounded so good at this moment.

‘Eukaryote’ has a beautiful and delicate entrance to the song leading to an enticing synth. The pads that continue to give this song an ambient feel from start to end. This is my standout song and it features heavily in my playlists now. ‘Skyward’ is an exceptional example of how Northcape manages to make the elements of simplicity become rounded and complete. From the trademark  synthetic sound of electric keys to the manipulation of beats which can be heard halfway through. And tinkering with the bass sounds so they are almost on the edge of distortion without pushing to their limits is cleverly done. ‘Raytracing’ fits into the flow of the EP perfectly adding to the already 4 previous tracks. For me it’s almost shrouded in a mystery with areas of reversed snare sounds and freedom within the notes which seem to take on their own identity and direction.

Ending on ‘ Green Wave’, this song stands on its own against others as it forms an almost sense of breaking free. It’s rather quite uplifting and reminds me of some of ‘umbers’ work. I think the key behind the song’s success itself  is  the difference from the other 5 songs. You are encouraged to listen a little deeper to the textures and its aptly placed at the end of the EP. I can’t imagine a circumstance were this collection of unique and inspiring songs will never leave my side. I have had the privilege to listen to some great music so far this year, and Glasshouse is up their with some of the best.