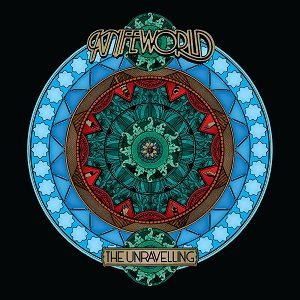 The "difficult second album" has become a well-worn reviewers cliché, but whilst some bands struggle with their second albums less than others, there's no doubt that the difficult second album does exist. Knifeworld supremo Kavus Torabi had quite a hill to climb following the rapturous reception to the bands first album, Buried Alone - Tales Of Crushing Defeat, not least because Knifeworld was not really a band at that point, more a solo project where the multi-skilled Torabi wrote and performed just about everything himself. However, piecing together a live band to take the album on the road, Torabi realised that he had essentially brought Knifeworld into the world as a true ensemble.

Torabi's intent with the follow-up was twofold: to make a record he felt surpassed Buried Alone..., and to write and arrange in a way that provided the full eight-piece band ("full octet with special guests", as the promotional material would have it) with the space to fully display their talents. Given the explosion of ideas and wonderful playing on Buried Alone..., this was a tall order. Whilst Torabi has admitted that there were times when the ambition of the project almost overwhelmed him, happily the tasks he'd set himself were not beyond him. Somehow Torabi manages to have pulled off both of his aims with the new-look Knifeworld.

Existing fans of Knifeworld's weird and wonderful sonic universe will be delighted to hear that Torabi's muse remains as inexhaustible and unpredictable as ever. Nor has Torabi lost his knack for a memorable song title. The opening track, 'I Can Teach You How To Lose A Fight' veers from pretty, relaxed indie rock, confidently voiced by Knifeworld's other vocalist Melanie Woods, into discordant guitar rock before breaking into a big sing-along bridge section underpinned with brass and acoustic guitar; from there, it builds slowly up to, and then falls away from, a staccato section propelled by hand-claps and chunky distorted riffing. If this sounds like a lot to cram into five minutes, you'd be right. In Knifeworld's universe, verses becomes bridges, bridges become choruses, choruses become codas: you're never more than a minute away from some vocal, lyrical or instrumental drama of the sort that will rip your expectations of where a track may be going right out from under your feet.

'Send Him Seaworthy' pitches itself somewhere between Blur, Pulp and Barrett-era Floyd, a sweet hummable harmony making the first few minutes an amiable indie rocker with sweet backing vocals. However, the unexpected is never far away: at the three minute mark, the track makes an abrupt volte-face, making way for a duel between keyboard and guitar that in turn gives way to a repeating horn pattern and a spiralling riff that steadily steers the song over the event horizon until discordant piano and a guitar figure, steadily growing in intensity, take it somewhere altogether different. Finally, having voyaged into the unknown, Torabi's vocal returns to steer it back towards the original melody. There's an underlying tension to all these gear changes that is utterly compelling.

'Don't Land On Me' is even less predictable, a meandering horn part interspersed with Flash Gordon-era Queen vocal stabs and almost theremin-like keys before it all settles down into a mid-tempo number, all tinkling piano and womb-like bass, interrupted now and then by a titanic Zeppelin-esque guitar riff that serves as a gear change between the various vocal sections. It seems utterly incongruous at first, but once you've heard the song a couple of times it's hard to imagine how Torabi could have arranged the song any differently. This is Knifeworld's strength: juxtapositions of the unexpected and unrelated that somehow seem organic, even logical in some parallel-universe way. There's a sweet vocal interlude, and then all hell breaks out in an even chunkier variation of the tracks opening, underpinned with thudding drums, a chunky metallic guitar riff, keyboard and vocal stabs and what sounds like sheet metal being beaten. And then it's back to the winsome acoustic strum of the song structure that ties the whole thing together. It's telling that although this track sits at the eight minute mark, it doesn't feel anywhere near that long. Knifeworld excel at holding your attention as a new listener; and once you've followed the trajectory of each song, you know that there's never any time to get comfortable: that tension means the songs continue to surprise and delight you many listens later.

The brilliantly titled 'The Skulls We Have Buried Have Regrown Their Eyes', on the other hand, is an altogether more worrisome affair. Icy synth and the sounds of someone pottering around in the room behind the listener give way to a sea of simmering feedback guitar and a troubling lyric. As the guitars ebb and flow, on the verge of exploding into life, the tension becomes thick enough to cut with a knife. You just know that it's going to be pretty gnarly when the inevitable explosion arrives... but it never does. The song just works brilliantly at keeping you waiting, on the edge of your seat.

These are songs that contain such a wealth of ideas that initially their invention seems overwhelming. Your initial impression might be of a bunch of musicians suffering from a case of group ADHD, but by the time 'Destroy The World We Love' has thrilled you with its progressive rock interludes, spiralling vocal melodies, xylophone and chopping and changing time signatures, you will most likely be beguiled rather than confused or frustrated.

'This Empty Room Was Once Alive', with its chilly keyboard, eerie clock-winding sounds and unsettling close-miked vocal, is another deeply unsettling listen, a complete contrast with the previous track. It almost sounds like something Steven Wilson might have come up whilst recording in his bedroom in the late 80s. Building up into a grand baroque crescendo, it descends into scraping violin strings, tinkling percussion and discordant keys, the sound of decaying clockwork Victoriana in some long-forgotten dusty oubliette.

The final track, 'I'm Hiding Behind My Eyes' serves as a self-contained epilogue of sorts. At nine languorous minutes in length, it gives the band time to stretch out in a way they don't allow themselves elsewhere. Rather than the unpredictable chopping and changing that occurs elsewhere, this final track is a stately, relaxed affair - the first rays of light creeping over the horizon after the listener has spent a long restless night spent rooting around in Knifeworld's attic of abandoned relics and curios. Its relaxed, shimmering opening expands into a gorgeous, echoing vocal-led section that finally bursts gloriously into life supported by a tide of brass and keyboard, a warm, inviting ocean of sound that reassures the listener that all is well with the world.

The Unravelling contains rather less of the more obviously psychedelic rock and heavy riffing of Knifeworld's first album, which may come as a slight disappointment to some. Korabi's ferocious lead guitar is used more as a supporting instrument here than the featured element it was the first time around: that's not to say it's not used - it is, and very effectively - just used more sparingly. However, Torabi's knack for welding together disparate styles and juxtaposing the light and the dark remains intact. It's to Torabi's credit that he didn't atttempt to make the same album again. The Unravelling is a treasure trove of delights for those who take the time to allow it all to sink in, but is rather less immediately impactive than Buried Alone...; a much more expansive, unhurried record. In short, this record feels very much like the yin to the first album's yang. If the third Knifeworld album can marry the fearless ambition and atmospheric beauty of this album with the power and relentless energy of their debut, then the world will be their oyster.