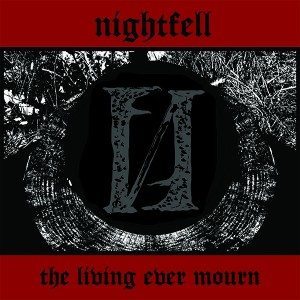 Out now through Parasitic Records and Southern Lord

Back in 2012 I was lucky enough to catch Aldebaran play a couple of times on their European tour with Noothgrush, and also to finally witness the impassioned fury of a Tragedy show. Both bands put out incredible albums that year, in Embracing The Lightless Depths and Darker Days Ahead, respectively. Extrapolating the directions each album took, with Tragedy eschewing D-beat entirely in favour of a lower, slower approach, and Aldebaran taking their already abyssal sounds to even murkier depths, it's actually not that hard to see how Nightfell came to exist.

Even so, when master of mastering Brad Boatright first mentioned a project brewing between Aldebaran's Tim Call and Tragedy's Todd Burdette, I responded with some glib comment along the lines of "Funeral d-beat, eh? I'm in!". When many months later The Living Ever Mourn was released, any preconceptions I may have had were utterly obliterated by these 8 tracks of terror.

Despite the disparity between each member's other bands, this album is neither simply slow crust punk or fast funeral doom, taking its musical cues from neither doom the genre, nor Doom the band. What it does do is channel the mournful qualities and aggressive atmosphere present in all of Burdette and Call's previous output into something wholly unique, allowing each of them to operate outside the constraints of their other bands. The result is an album that is almost deliberately difficult to classify.

Opening track 'The Last Disease' begins with chiming guitars, before being joined by some downright bombastic drumwork from Call. When they settle into step, the riff is immediately recognisable as one of Burdette's; no-one else manages to infuse that much sadness into their anger, and express it through six strings and amplification. The double-kick rhythm and UGH-ed vocals set this apart as being a far more metal proposition than his usual work, but the synth interlude that leads into 'I Am Decay' doesn't allow things to settle into one particular mould. The track features everything from frenetic drums to funereal string bends, and since it never drops down to the extended torture of doom tempos or gears up to deliver sharp jabs of punk, the overall effect is more of an incessant pummeling.

'Empty Prayers' pushes the boundaries even further out, with Burdette's layered singing (yep, singing) giving the track an elegiac choral atmosphere. The sparse acoustic guitars that enter the fray from around the halfway point are even more unexpected, though they are but a momentary respite from the overwhelming hopelessness before a gigantic fuck-off pickslide and cacophonous clatter bring everything crashing back in.

The blackened buzzsaw tone of 'The Hollowing' is another total departure, demonstrating that if nothing else there's certainly something here for everyone, no matter what your preferred strain of metal. It never feels like they're stretching themselves thin, each track has such an individual identity, yet still feels part of a cohesive whole. Y'know, the way an album should do?

The next interlude is the seemingly obligatory 'move to Portland, start playing neo-folk' moment, but it's thankfully soon brushed aside by the hulking riffage of 'Altars To Wrath'. This is the only song on the album that I could actually picture coming from the players involved, so effectively does it combine their typical styles. The track becomes increasingly Frost-ian as it goes on, perfectly demonstrating just how influential Tom G Warrior's troupe were on every single fractured facet of metal.

Closing with 'Funeral Dirge', a galloping, triumphant number that belies its title, once again the cohesion of these eight seperate parts of a whole is reinforced. When the track fades out with martial drums and howling winds, I immediately want to play through the whole thing again, there are so many stand-out moments just begging to be heard. The Living Ever Mourn is a rare beast in modern times; not merely a collection of songs, but a fully-realised album.