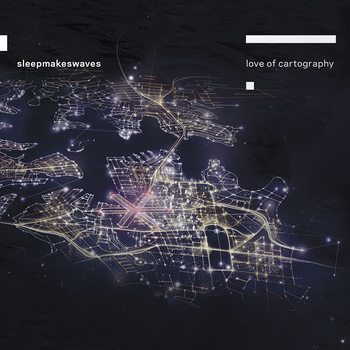 I know that an album is timeless when, after many years, I return to it and it still sounds fresh. This is what happen to me with ...and so we destroyed everything by Sleepmakeswaves. The instrumental post-rock four-piece band from Sydney is now back with another amazing album, Love Of Cartography, that, starting from the name itself and its fantastic album cover, proves the tendency the band has to map new creative directions within the instrumental rock framework.

The new album was recorded in Byron Bay with producer Nick DiDia (Pearl Jam, Stone Temple Pilots, Rage Against The Machine) after fans – and me of course among them - helped to raise over $30,000 through a Pozible campaign. I listened to Love Of Cartography many times before writing about it and, even now, 'Emergent' is playing fulfilling my room with its melody and creating a somber climax.

The first thing you'll notice listening to Love Of Cartography is how the Aussie band has moved towards a electro-rock sound that is gonna blow your mind. As masters of meticulous instrumental rock, apocalyptic guitar landscapes, they spoiled us delivering great music, and Love Of Cartography is gloriously no different.

Kid, Otto, Alex and Tim, again wonderfully demonstrate their ability to swap pursuing rhythmic sections with soothing ambient segments without losing a step. Love Of Cartography is full of emotional passages that captivate the listener more than the most beautiful mermaids.

The journey through the ten tracks of Love Of Cartography starts with 'Perfect Detonator' that launches the listener into the Sleepmakeswaves's space. 'Perfect Detonator' is a complete listening experience, peppered with sonic leitmotifs that fold back onto themselves once the final chords are drowned out by silence. The exploration of this instrumental rock world by the Aussie band continues: ‘Traced in Constellation' flits between glitchy synths and shimmering guitars, whilst the short 'Singularity' unfolds as an interlude and creates a beautiful tension that explodes in the brilliant 'Emergent' that incorporates both post-rocky and electronic elements and suggests that there’s room for the old and the new Sleepmakeswaves's styles to coexist.

'Emergent' has a slow-burning introduction but the band doesn't hesitate to proves that they have lost none of their appetite for noise and pursuing rhythm. This track is a journey within a journey; simply awesome.

There’s space, too, for the band to expand upon loud-quiet dynamics; 'Great Northern' has a great mix of those segments and listening to it is pure joy. 'The Stars Are Stigmata' is of a bit heavier ride instead that brings us back to the Sleepmakeswaves's style we already adore. This track is as engaging as it is dramatic and the balance between acoustic and electronic elements is a killer.

Passing through the soft 'A Little Spark' that invites quiet contemplation, we land onto 'Something Like Avalanches' that is a perfect track with its amazing guitar riffs. The journey through Love Of Cartography ends with the beautiful 'Your Time Will come Again' that blends in it several music genres and the outcome is a beautiful, notable electro-rock ballad. 'Your Time Will come Again' is a credible substitute for nirvana, demanding you to set yourself free from all corporeal existence. Your mind will thank you later.

Love Of Cartography ends here but its music won't leave you. The journey is one way.

Sleepmakeswaves will spend the majority of July and early August touring to promote the new album, the east Aussie coast, Adelaide and Perth. I saw them twice, in Rome and in London, and I'm ready to travel again to see them playing live. If you get the chance, take it.