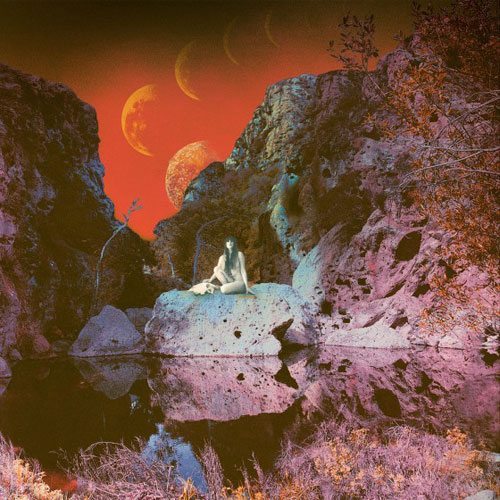 First, an admission: I’m something of an obsessive follower of Dylan Carlson’s music and influence, having been a long-time Earth fan; but in the last two years even more intensively, as I’m doing research for my PhD studying drone metal and its audiences.

Amongst interviews, surveys and reading thousands upon thousands of reviews, this has also required me to go to as many gigs as is remotely possible (I went to see Om three times in a week earlier this year). So, while I’m listening to Earth’s seventh studio album Primitive and Deadly for the first couple times now, I’ve heard some of the riffs, at a show in Antwerp, and before that at an impromptu solo Dylan Carlson show in Camden where he previewed tracks before some of them had titles. When the Jabberwocky festival collapsed under the weight of expectation about the fancy hand-dryers, it was of course Earth who I was keenest to see in one of the hastily-arranged fallout gigs, and was lucky enough to get to the small venue in Dalston, where I picked up the new album.

There’s been a lot of anticipation about this new record, with talk mainly circling around two aspects: the reported vocals on three tracks; and Earth’s return to distortion-heavy riffs after many years, and four and a bit albums of acoustic timbres and sombre, expansive country-drone. Sure enough, opening track ‘Torn by the Fox of the Crescent Moon’ kicks in with a looming, confident guitar sneer backed with a monstrous engine-chug that reaches back past Pentastar (the album most often mentioned in conjecture about the new style), and even further back than Earth 2, with closest kinship to the track ‘Ouroborous is Broken’, originally on 1991’s Extra-Capsular Extraction. A sentence in the Southern Lord promotional paragraph about the band ‘completing an Ouroborean creative cycle, twenty-five years in the making’, while hyperbolic, does in fact seem to be precisely appropriate here. Hearing the monotonous pummeling of ‘Torn by the Fox…’ at the recent London gig, (despite not having heard the album yet) it seemed inevitable that the chords at the end of the song would bend round back to the ‘Ouroboros’ riff to begin that early, ancient and eternal live favourite to close the set.

‘There is a Serpent Coming’ has a suitably portentous opening to fit its title, with a full noisy-textured guitar sound making slow revolutions before a soft cymbal crash and another, higher, stepping-down-and-up guitar line cuts in. And then, the first entrance of Mark Lanegan’s whiskey and smoke vocals, fairly quickly rising from his trademark glowering gravel to more animated hectoring about serpents and beasts, stations and revelations. Both emerging from Seattle, Lanegan and Earth have spent decades in different guises exploring and creating their own distinctive flavours of Americana, steeped in a sense of history oriented towards the outsider and the marginal. Here it’s as if Lanegan has wandered out of the desert blaze to testify about some kind of sunstroke apocalypse, unable to escape the insistently stepping guitar line that hovers like a hangover, while grungy hums crawl around below.

The next track ‘From the Zodiacal Light’, featuring vocals by Rabia Shabeen Qazi, has been made available as a preview. Only having listened on crap laptop speakers/earphones, the vinyl has a much more satisfying thump and howl about it, with Bill Herzog’s ominous grumbling bass allowing Carlson to wail, rumble and squeal a little. Qazi’s echoing voice (darkness… darkness…drowning…drowning…) covers similar terrain to the vocals on the previous track, the two singers giving complementary performances, both in their declamatory but ethereal delivery style, and in the lyrical shades of apothecary and prophet, despite each having penned their own lyrics for their respective songs.

I’m still not sure about the tracks with vocals; in some ways I think we’re so preconditioned by the overwhelming majority of song-based music around to listen to vocals as just another instrument, especially music which, like this, comes with a past record of looking elsewhere for its sonic foundation. As a result the songs with vocals, especially these first two, come across at first almost more like Mark Lanegan/Rabia Shabeen Qazi tracks than Earth ones. This isn’t even a reprise of Carlson’s vocals on Pentastar tracks, or Kurt Cobain singing on ‘Divine and Bright’: those tracks worked well as hazy stoned mumble-alongs which were still all about the driving riffs, but here, in fact a first for the band, the singers are very much set up to sing songs with a band. The thickly layered guitar work, though, Adrienne Davis’ always subtle but forceful, well-placed hits, and Bill Herzog’s commitment to the growling, revolving bass riffs come together to make a soup dense enough to offer nuances with each repeated listen. In any case, Earth albums seem, for me at least, to be slow, slow, slowburners which gradually sink in, embedding themselves in consciousness. So, perhaps in a few months these vocal parts will also sink in, and end up seeming, like the weighty cycles of ‘Harvey’ and ‘Old Black’ have, as inevitable as gravity and the horizon.

While a return to the heavy fuzz might seem an abrupt move after Earth’s previous albums seemed to be venturing further into dark acoustic landscapes, in solo performances and non-Earth releases at least, Dylan Carlson’s guitar has been no stranger to the distortion pedal nor the tight-gripped control of feedback. Still, standing in front of the full band on stage, Carlson is playing as assuredly, even exuberantly, as ever, sleeves rolled up for work and right out front close to the crowd. Raising his guitar up, manoeuvring to extract the most resonant of tones, he looks like a snake-charmer who has finally laid to rest all doubts and fears, taking a new pleasure in the power of his own shaping of noise. Back on the album, ‘Even Hell Has Its Heroes’ gives free reign to this returned lease of life, the bass and drums lurching on like wheels over rough ground, while the guitar launches in with long, bent notes and careful blasts of feedback at the edges of each lead melody line, and a carefree jabbing and slashing around a loose series of chords. Harking back to 1996’s ‘Peace in Mississippi’, but without even the restraint of paying homage to Hendrix in that track, there’s such a fullness to the guitar on this track that the effect is invigorating.

‘Rooks Across the Gate’ starts with faintly tinkling bells, a nice nod to the earlier windswept plains sound, before the guitar tones hit, with interweaving lines and a trademark Earth slightly discordant sounding low downtuning. Then more guitar smashes in again, and once more the bent notes are allowed to soar over thudding, smashing, thick oily sludge waves of guitar. This time Lanegan sings Carlson’s lyrics, in slightly more subdued manner, with some nice echoes and duelling with a bit of a country-reminiscent twang. The guitar leads are similarly paced to the Earth riffs of old, with some of the same glimpses of bright light in the mind-dissolving numb repetition, but across the album there is perhaps more evidence of deliberately built structures, developments and progressions in the guitar parts, and not just in accommodating the singers but approaching more structured forms. Still, what’s most appealing to me is that on this track, all of that is underpinned by a fat, droning, throbbing fuzz and a low chiming as the constant bedrock, extending out a minute or so after all else has faded or otherwise expired.

While presumably the submersion into the primordial amp drone is a fine ending to the CD version, another track remains on the fourth side of the vinyl edition. ‘Badger’s Bane’ gets into its unhurried stride, with arpeggios or near-arpeggios creating again that discordant effect of close but just-off notes. Unhurried then settles into slow, and we return to mantra-like circling of the chord progressions. For a section in the middle, the guitar collectively fades to highlight the pinpoint thuds and cymbal hisses for a moment, which continue while a muffled guitar line murmurs from the next room and the crackling ghost of a loud amplifier bides its time… then back everything comes for a short reprisal. Then we’re left to enjoy some more echoing minutes of fuzz and hum before the album finally retreats into darkness.

These slightly more developed edifices, yet which still draw on the fundamentals of carefully resonating guitars, seem to be mirrored in Samantha Muljat’s cover art: expansive and atmospheric like previous iconic images such as Hex or Earth 2, yet perhaps going further to create a world as well as an atmosphere with the woman and the five moons, all hinting at a particular vision rather than relying on supplication to the nondescript. Actually it’s fitting that the cover (especially inside) with its forests, grass and stones given a visionary tinge through odd colouring and light, bears closest relation to the artwork for Hibernaculum, a collection which also excavated and examined past Earths through a new style which was also a return; that release also went once again round the ‘Ouroboros’ track. There might be ‘a serpent coming’ in Primitive and Deadly… but from another perspective it looks like Earth themselves returning to the serpent that eats its own tail.