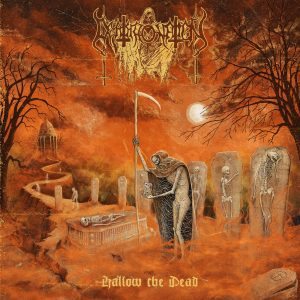 “And when my spirit wants no stimulus or nourishment save music, I know it is to be sought in cemeteries: the musicians hide in the tombs; from grave to grave flute trills, harp chords answer one another.”

The latest release from Nürnberg based Deathronation is the soundtrack of cemeteries. The entire album is full of sound that summons to the mind images of graves, epitaphs, ashes, and worms. Hallow the Dead is full of songs that were exhumed from instruments and reburied into the ears of the listener. This is an album that houses the listener in a mausoleum of obscurity used to shelter a corpse at the end of life.

As the above quote above implies, the members of Deathronation undoubtedly hide in the tombs, moving from grave to grave, wielding their instruments with every movement. The first track on the album, ‘Deathchant Assyria’ is reminiscent of old gory horror movie scenes, sounds that can only be heard in nightmares. Guitars wail and sing as the gnarled vocals narrate the scene.

‘Beg For Your God’ is another standout track on the album. It explodes almost instantaneously, every instrument performing with the same viciousness. You’d think the guitar sound was being produced from a scythe played by the grim reaper himself. The drums penetrate every orifice like maggots and flies feasting on a fresh corpse. The album plays on…

Songs like ‘Steelpanther’s Fist’ and the closer, ‘Age of Whoros’ pulverize the listener all while showcasing Deathronation’s strong musicianship. Played at unrelenting speeds that still fluctuate with crawling melodies, they acts as background music that could rightfully play at the moment of internment. The vocals continue to be heaved out and upward, spewing from the system like bile from the stomach.

Old school death metal in style, Deathronation has found a way to blend powerfully catchy riffs with tinges of black metal and even elements of thrash and crust. They know when to slow it down and unearth the core of their sound, and they know just when to speed things up to keep images of horror alive. This album has a little bit of everything in it, and that’s what makes it stand out in a crowd. Out now on Ván Records, pick it up and experience the old school death metal sound in real time.