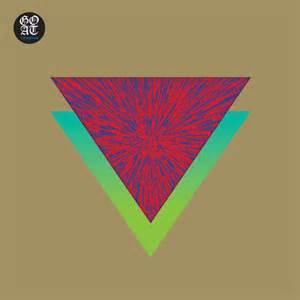 Second albums can be a little troublesome for a band. Do you carry on doing what you did on the first album? Do you change tack completely? And what happens when the weight of expectation is huge? The Stones Roses took years and ultimately failed, Led Zeppelin invented a new genre. So how will 2013's biggest critical hit fare? Well, this is Goat, and in Goatworld the rules are a little bit different.

Perhaps playing it safe by curbing expectations with a live album release to take off some of the excitement and setting out on tour to road-test new songs, Goat have also perfected the art of "virality" by drip feeding songs at the drop of the hat and having advance listens to Commune, their new album. It's a perfect match of control over where they are heading but also keeping attention at fever pitch and once the album is released they just might succeed.

Aah, who are we kidding. Commune is fantastic. It is brilliant. It is lively. It is simply Goat...and, if we're being brave here, it is a much better album than World Music. Commune is the sound of a band settling into themselves and knowing exactly what they are good at but still pushing the boundaries bit by bit.

We could argue that this is possible due to the nature of Goat's music. Always a hybrid of dance, funk, psych and afro-beat, the songs coalesce around themselves and offer umpteen chances to disappear down different avenues. Sort of a Grateful Dead for the new generation, their music is all about that communal experience and as Goat will say themselves, they are not songs, it is simply music.

You know you are in for a great ride from the off as the tolling bell of 'Talk To God' heightens expectations until it's tumbledown beat signals yet another highly charged advance into the cultism of Goat. Wailing voices link in with last albums themes and it is like World Music never ended. This is the link and you are now back in Goat world.

'Words' is the first sign of them branching out as they plant themselves firmly into some lost 1970's psych region as a screaming guitar gives some classic rockism to the duelling disco and afrobeat. The fervour doesn't stop there with the transcendent 'The Light Within' taking lift off and just abandoning you somewhere up there. It's the aural equivalent of ecstasy except this time there is no horrible come down.

Those first three tracks are there to do a job. They let you back into Goat world with something familiar and they allow you to relive all those moments you loved on World Music. This is where Goat suddenly change tack though and as the drum beats get louder and denser, the whole idea of a commune is brought to the forefront as the slow burning 'To Travel The Path Unknown' suddenly lands at the brilliant 'Goatchild'. At this point you may as well throw up your arms, don a goat mask and give your life over to this band, this is the point when Goat cross the line into full communal cultism.

The frightening 'Goatslaves' continues this dark theme as tribal drums beat out against a grinding guitar riff and the fires of the jungle flicker around you as you dance on hot coals. It's a peculiar feeling and one that is unlike anything you may have come across before. Goat have found a way of expanding their palette and exploring regions not gone before. It may frighten off some of the fairweather fans but those in thrall to this band will fall for them even further.

If anything Commune gets even darker now as the thrill of 'Hide From The Sun' leads into the slight break of 'Bondye' before one final reverie where the guitars are turned up to ten, the drums become even more excitable and our favourite waling vocalists are in full swing pleading you to join the Goat lord and leave the life you live behind. It's feverish and sweating and is simply one of the greatest ends to an album ever and will sound absolutely brilliant live.

So does Commune succeed? Yes, it does so in many ways. Where-as World Music had parts which could be labelled as a bit throw away, Commune is a whole piece. The music is less eager in it's excitement to get to you here too (although that does not discount the tremendous power they have in reaching a fever pitch). Commune has also offered several ways of moving forward on to that third album too which shows a band settling in to produce music for a long, long time. It is quite possible that Commune is going to be a huge album, there is a lot of excitement about Goat at the moment and they have a knack of keeping fans happy. The Goat herd are going to be more than pleased with this little slice of music.