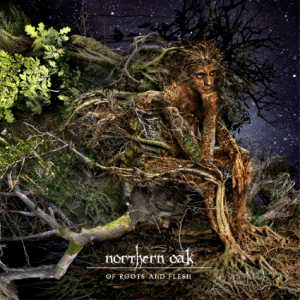 Released on October 4, 2014 via Bandcamp

Of Roots and Flesh is the third album by Sheffield based progressive folk metal Northern Oak. Their sound is an intricate blend of modern English folk music, black metal and doom. The folk element consists of swirling flute and violin sections, that soar through brutal screaming vocals and metal riffs.

Of Roots and Flesh was funded by fans using an online Kickstarter campaign, with the money used to record at Skyhammer Studios with producer Chris Fielding, who has recorded the likes of the great Electric Wizard and Primordial. They were looking to get a more professional sound and that is exactly what they got!

Opening track ‘The Dark of Midsummer’ sneaks up discreetly, with the sounds of the forest and eerie chords ringing out. Then out of nowhere heavy marching riffage with a flute line appears that resembles ancient armies on the move. Proceeding with slow rumbling black metal vocals it later moves into more familiar screams that keep the energy levels up. Northern Oak have a unique prog element that keeps the listener on their toes. This nearly 9 minute opening track veers off in an atmospheric folk middle eight but arriving back to hooky riffs and flute stabs (yes, flutes can do that). The track finishes with a screeching but warm lead guitar solo with a strong classic metal style.

Next track ‘Marston Moor’ comes crashing with a more lively sound. It includes excellent violin, heavy raw riffs and vocals, over what could be said as rather ambient flute. ‘Gaia’ shows a different side to Northern oak. It starts with a bass line led by flute and folk guitar, which sounds strangely psychedelic folk, however this quickly gives in to talk of “scary animals” that swiftly moves into fist-clenching heaviness. This song also contains textured vocal harmonies and a furious black metal ending with a dynamic guitar solo to end. ‘Nertus’ starts with a sorrowful piano to set the scene for the grinding noise to come. This falls into some a traditional sounding violin but the metal comes soon behind.

‘Isle of Mists’ is a folk instrumental that sets the scene for our next instalment, which is an epic doomy track called ‘Taken’. This track pushes the album forwards. It is slow with relentless vocals that weave effortlessly through the theme. The scene is set as soon as the violin comes stumbling in awkwardly but soon flows onto the track. Just as we get comfortable with the relentless noise this song drops out to a midsection with a nautical feel, with accordion and piano – is this what it feels like to be lost at sea? Soon to be intensified by the continued aggression pushed by fantastic drumming.

The track of the album has to be ‘The Gallows Tree’, with its massively hooky heavy chorus with catchy violin line. The song has some excellent arrangements including call and response between folk instruments and lead guitar; reminiscent of classic Skyclad. I can imagine people going crazy for this one at live shows.

‘Bloom’ shows off the talents of the band’s flute player making some risky sounds to back this blowout of a song. Next up, title song ‘Roots and Flesh’ has an epic rock feel, starting off with a major guitar riff but taking a turn into a spoken word sections that boast the band’s lyrical content and gives a bright contrast to the screaming. The penultimate track ‘Only our Names will Remain’ helps conclude with some classic gang vocals and soloing. To end the album we have a poem backed by solo violin to give an authentic pagan folk metal farewell.

I recommend this album to all folk metallers. Although it starts off slow, it grows stronger with each track. The production sounds fantastic, the songs have excellently written arrangements and to top it all, it has a man who is a tree on the front cover!