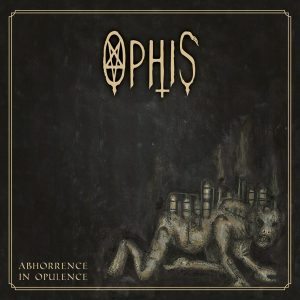 Released on September 5, 2014 via Cyclone Empire

Ophis is one of the greatest death/doom metal bands to emerge from the cesspool of Germany’s underground catacombs. Formed in 2001, the band released their first EP in 2004 and their first full length in 2007. Germany’s doom scene is rich, with familiar heavyweights like Ahab and Bethlehem dominating the landscape. Ophis belongs to that same group of musical masters. The band is back with their new album Abhorrence in Opulence. It is a blueprint for how to write, play, and produce the style of crushing doom that I absolutely love.

Abhorrence in Opulence is five tracks, totaling 62 minutes, putting the average song length at almost 12 and a half minutes. Every second is depressingly slow and pulverizing. Phil Kruppa is the only original member left in the lineup, and he has molded the band’s sound into one of utter despair. Kruppa handles vocals, while he and Martin Reibold craft monstrous guitar riffs together. Olly Kröplin carries the all-important low end on bass. Nils Groth keeps precise time on the drums, no easy feat in the molasses-slow time signatures used by these rulers of ruin. Oliver Carell at Blastbeat Productions Studios in Kiel, Germany, mixed and mastered the record. His work is impeccable; the production on Abhorrence in Opulence is top-notch. It’s refreshing to hear each instrument clearly and actual sound dynamics in our age of compressed, overly loud production.

Ophis’ brand of doom melds death and funeral sounds together to create overpowering waves of rejection. The band knows how to take the traditional funeral doom and death metal sounds and meld them into truly interesting musical époques. The sounds are cold; engineered to exacting calculations and designed to dominate and distress you. ‘Disquisition of the Burning’ sets the mood with riffs reminiscent of My Dying Bride and crystal clear, dominating drums. The drums stand out on every song, in large part because of the excellent mix and production quality. ‘Among the Falling Stones’ showcases more melodic pieces that tone down the wall of sound. ‘A Waltz Perverse’ has some black metal elements, and the edge of death metal heaviness is laced throughout as well. The final track ‘Resurrectum’ also has some quieter moments. All of this is crafted within the doom/funeral doom genres, but Ophis never gets boring, no matter the length of the song.

I’ll admit that this sound isn’t for everyone. Funeral doom/death doom is not easily accessible. You’ll have to commit 62 minutes of your life to Ophis and Abhorrence in Opulence if you want to pull out the suffering from the music, and from within yourself. It’s worth it.