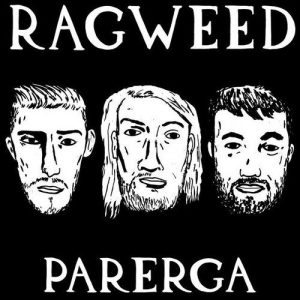 Parerga, the self-released début album from Brighton-based trio Ragweed, is a thunderous assault from start to finish. Building on the promise of their brilliant 2012 EP Double Chalker the songs erupt forth with an unbridled passion that captures the ferocity of their live sound; its definitive proof that Ragweed must be ranked amongst the best of the new heavy guitar bands in the UK today.

Styling themselves as “sludge punk” they immediately bring to mind the heavier, more raucous 90’s “grunge” of L7, Bikini Kill and Therapy? mixed with a heavy dose of not-shit metal. Their sound proves again that punk and metal can breed successfully, and the offspring here are nasty, brutish and feral.  At a time when guitar music is ostensibly on the wane and the few remaining purveyors of the genre are generally derivative and/or rendered anodyne through a misguided pursuit of mainstream acclaim, Ragweed are a refreshingly uncompromising blast of DIY thunder. The first line sung on the album – “I’ve had enough sat on your perch” – sets the tone for the ensuing maelstrom.

The songs are rich with punishing riffs, filthy bass lines and sheering drum rolls, while lead-singer Tom Adamson’s vocals oscillate between laconic, scornful reproach and bobcat-in-labour screaming. Album opener ‘Black and Scaly’ begins with an ominous bass line before exploding into doom-laden riffs that sound like a furious mosh pit smells. The “I don’t want this!” refrain in the chorus is sung with a palpable passion and sticks long in the mind. ‘Dermol Dispenser’ is perhaps the most accomplished song on the album; displaying the bands ability to switch tempo and style with ease, it’s shot through with tasty hooks, sing-a-long a choruses and a savage guttural wail.

‘Nip the Bud’ begins with a funky bass line before turning to punk stabbing and a soaring chorus that climaxes with a characteristic wail.  ‘Strange Colour’ is another bass-heavy number which has Tom at his most imperious; the vocals drip with sarcasm and drug-induced torpor before exploding into a ferocious bawl that jolts the senses. The influence of Fugazi is evident on ‘Divorce Reality’ but again the song is very much Ragweed’s alone, though it’s maybe the most conventional number on the album. ‘Gun Fever’ is ugly, coarse and vitriolic and brings to mind the scuzz of Pissed Jeans; it sounds like the malevolent-little-shit-of-a-song on the album that refused to be rejected…and great for it! Final (and shortest) song ‘George Moshington’ succinctly captures the bands distinctive characteristics; a rhino-like bass, enormous flaying grungy riffs, schizophrenic vocals and merciless drumming.

Parerga is certainly loud and aggressive but more than just power and velocity; the songs are carefully crafted and executed, and often insidiously melodic; the second half of ‘Strange Colour’ in particular boasts a salacious groove that’d get the North Korean Ministry of Truth pulsing. If you like METZ, Pissed Jeans, The Hyena Kill, Yokozuna and earlier noise merchants like Fang, Helmet and the Melvins, then “Parerga” is for you; a brilliant, corrosive, sonic amphetamine from a band very much on the up.