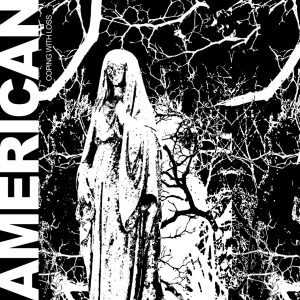 Hailing from the dark realms of Virginia; American is a blackened hardcore band which crosses the lines of many genres of extreme metal and punk rock. Their first track opens with a blood curdling scream, which unleashes a hateful noise of aggression, the track echoes and scream with humming feedback.

With chugging guitars and pounding drums, this duo brings on seven tracks of pure blackened detest. The only thing stopping this train is moments of eerily calm soundscapes. The tracks only average 3 to 4 minutes but seem to linger further. Not in a bad way where you wish it would end, but in a way that keeps you interested in the tracks. American’s musicianship really shows throughout this album. The band knows how to make a great track with grinding minimalist moments and scourging droning tracks of pure dismal enmity. The switch from black metal to sludge to aggressive hardcore is seamless and natural, painting a complete portrayal of dread.

Coping with Loss is a solid album that I think any blackened fan would enjoy. It has a little of everything and is bitter and spiteful to the very end. Weaving a aphoristic ambiance which envelopes the listener, like a deep wound with a slow twist of the knife. Coping with Loss is a great album. Full of raw emotions, which really blow me away. This band is really epic. I highly recommend this album to anyone who is a blackend hardcore fan. I am excited about the mixtures of two awesome genres and the bands that have been putting out great albums like this one. I cant wait to hear further from this band and maybe to catch them on tour.