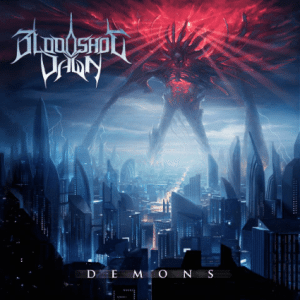 Released on October 26, 2014 via Independent

It’s a little ironic that after releasing a single about “the death of all gods”, Bloodshot Dawn decided to find out exactly how much their fans’ faith was worth. A successful Kickstarter campaign, hard won with some prestigious support slots and a great debut album, has given the band access to major label level production for their second without any of the usual strings. Proving themselves worthy of the eight grand of trust they received, they have delivered a fantastic album – Demons.

Guitar worship is at the centre of Demons. Both Ben and Josh are talented players and an impressive roster of guest guitarists that includes Andy James and Per Nilsson adds to the quality on display. Even Anthony Ridout is involved in this for moments like ‘Unified”s brief Dream Theatery bass solo. The surfeit of exceptional soloing is so great that leads which would be the focus of a lesser album are used under Josh and Ben’s competing voices. This has resulted in overwhelming melodic extremity on the scale of Fleshgod Apocalypse, but with the precision of Scar Symmetry’s technically gifted attack.

Deals Death’s Janne Jaloma has quickly made himself comfortable upon Bloodshot‘s drum throne. He can hit an incredible pace, and stays nightmarishly fast for most of the album, but he’s also capable of backing off and giving songs a bit of breathing space. He doesn’t sound perfect, as the triggering and sampling used to maintain consistency at this tempo has made his drums sound sterile and the kicks in the midsection of ‘Consequence Complex’ appear completely artificial. However, their percussive sound and place in the depths of the mix mitigates this for the majority of the album. An ordered cacophony beneath acerbic rhythm guitars, Janne is Demons‘ infernal heartbeat.

Years of underground activity have paid off for Bloodshot Dawn with a genre shaking release that is easily the best melodeath album I’ve heard this year. It is rare to find something that is as exciting to listen to as this, an album that makes the host of excellent metal being released right now seem grey by comparison. Simply, Demons is a superlative album by any possible measure and an ample reward for the support of Bloodshot‘s backers.