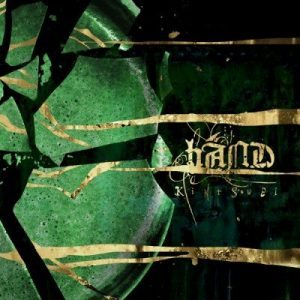 Released on November 3, 2014 via Brutal Elite

hAND are a British prog rock group that takes inspiration from metal, alt rock and video game soundtracks. So I should really like them. Unfortunately, enthusiasm and the good taste that their inspirations demonstrate isn’t enough to make third album Kintsugi worthwhile.

Guitarist Kieren Johnstone is hAND‘s best hope for redemption. Between the proggy riffs that give Kintsugi structure and ‘Hide You”s sweep picking runs he shows himself to be a diverse and accomplished player. Supporting this, new keyboardist Tom Johnstone has been given the freedom to utilise a wide variety of synths ranging from organs to trance leads and chiptunes in a seemingly random selection. This suggests playful experimentation in the studio but also sounds a little amateurish.

The engineering behind Kintsugi is equally variable – sometimes the kick drum triggers work well and sometimes, such as during the introduction of ‘Windlestraw’, they sound like pathetic taps against the drum skin. Though the guitars generally come out well their most distorted tones often end up overly fuzzy and compressed, not so much heavy as awkward and ungainly.

Kat Ward’s singing is by far the weakest part of Kintsugi. What should be the gold holding the rest of the album together instead weighs it down with something far more base. Kat aims for a delicate and vulnerable voice but ends up far too flat and thin to achieve this. She does manage a pleasing softness to her tone in short bursts, but always ends up doing serious damage to the songs that she contributes to. The extended instrumentals of ‘Through The Big Door, Up The Stairs And Out’ and final song ‘Words To That Effect’ are far from groundbreaking, but they demonstrate that hAND would function much better as an instrumental band.

Kintsugi is a disappointment. I can hear that hAND have a genuine passion for their craft so it’s upsetting that this is not a successful expression of it. The good ideas they have are forced to compete with inconsistent execution, limited production and dreadful vocals. In the end, they are lost.