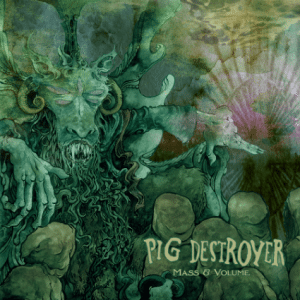 Released on October 14, 2014 via Relapse Records

Where do I even start with this one? When I heard of  Pig Destroyer releasing Mass & Volume, I was excited to hear an album filled with rip roaring grinding tracks. Then I heard this album was going to be more of a sludge album. I was really confused, but then again the times are changing in the extreme metal world and it seems to be heavy, you need to slow it down a bit.

Two tracks, the album Mass & Volume is exactly what they mean, heavy, brutal, and filled with a nihilistic emotion. The title track ‘Mass & Volume’ opens up with an escalating ambiance. Progressing towards the harsh rings of distorted and feedback. In an almost serene fashion the track continues to unfold, drone, and descend deeper and deeper into a dark place. The vocals hit at the 8 minute mark and honestly surprised me. With familiar growl of Pig Destroyer, but instead of the emotional screams of anger, this growl hits a somber hatred. One that is towards a hatred of self. The track continues to drone and reverb, reaching an almost enlightened state with a haunting chorus and a drone of caustic guitar notes. ‘Mass & Volume’ is a true anthem to a bleak and inner loathing.

‘Red Tar’ opens with a fierce and more outward anger. The guitars chug at a more sludgy pace with thundering and hostile drumming. ‘Red Tar’ is more of a traditional sludge song filled with hardcore punk rock notes and wrath which is more accustomed from Pig Destroyer. ‘Red Tar’ is again filled with and underlying emotion of hope in the bleakness. A kind of salvation in the madness which the song lyrics describes but as heavy as it names suggests.

Mass & Volume is a great album. I was surprised and a little taken back with the new approach that Pig Destroyer was going for on this EP; however, the new change in tempo was executed perfectly. The tone of the album is still the blinding anger that Pig Destroyer is known for and loved. The tracks are haunting and left me wanting to hear more. I hope that Pig Destroyer has a follow on to this album in the same fashion as Mass & Volume. I really enjoyed it a lot!