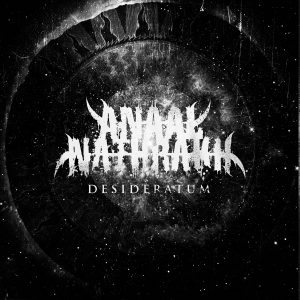 Anaal Nathrakh plays a brutal mix of industrial, black metal, and grindcore that doesn’t let up. Since 1998, they have been raining aural hell down on the earth. Their first full-length album, The Codex Necro, was raw black metal. From then until now, Anaal Nathrakh has morphed into an extreme onslaught that continues on this year’s Desideratum.

Desideratum is the next logical step in the band’s evolution. Over the last 16 years, every record that Anaal Nathrakh has released has been unrelenting in its ferocity, even as their sound has changed. Every record that they have released has been nonstop, rip-your-face-off savagery. Dave Hunt (V.I.T.R.I.O.L.)’s vocals and Mick Kenney (Irrumator)’s music is so intense that you’re quite often left breathless. The duo employs more electronics on Desideratum than ever before. The production is also quite clean, with each sound, each riff, and every moment of clean or screamed vocals ringing clear. This is not an easy feat given the bands trademark noise, but this is another step that they have taken with the new album. Unfortunately, this one is more of a miss than a hit for me.

Mick Kenney plays everything else on the album, from the programmed drums to the heavily distorted guitars. He also handles all of the electronics and sampling. The percussion is notable, as are the keyboards and samples. Anaal Nathrakh is the epitome of extreme metal because of the way Kenney mixes blistering black metal and industrial sampling. ‘A Firm Foundation of Unyielding Despair’ features these industrial sounds and some extra processing on Hunt’s voice to create a chilling, machine effect. The song writing is varied and keeps things interesting. ‘Unleash’ opens the album with tremolo guitars and smashing drums. ‘Monstrum in Animo’ has pounding blast beats that don’t quit, but then ‘Sub Specie Aeterni’ has a full-on metalcore feel. I definitely wouldn’t say it’s an easy listen, but Desideratum may be Anaal Nathrakh’s most accessible album to date.

Dave Hunt’s voice is quite spectacular. He travels from howling screeches to clean melodies and back with ease. On tracks like ‘The Joystream’ he incorporates growls and strong singing, shrieks and screams in a haunting mix that fits perfectly and shows off his range. ‘Idol’ is another track with singing hooks that catch you and stick with you. Hunt’s voice is truly an instrument.

Anaal Nathrakh has been pushing into the electronic/industrial realm for almost a decade, but Desideratum is so heavy on the electronics that it turned me off a bit. The record is so cold that it comes off as over-produced and a bit empty feeling. Long-time fans will recognize the evolution and will enjoy it. The band will probably gain some new fans as well. It’s an enjoyable listen, but not one of my favorites.