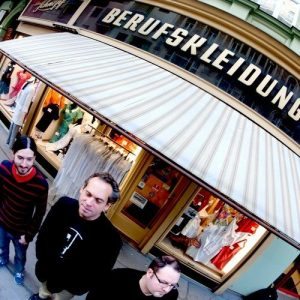 I returned from my one visit to Vienna in 2009 ranting about a city full of garish imperialistic architecture and bloated Americans stuffing their faces with over-priced pastries. “Stale” was my measured assessment of Europe’s self-styled “City of Dreams”. After hearing Vienna-based Berufskleidung’s eponymously titled debut EP I’m desperate to go back; clearly I missed something.

“Berufskleidung” – which translates as “workwear” – are a three-piece who describe themselves as influenced by “the Hamburg school and proto-punk of the 60s”; lead singer/guitarist Andrew Mangold also plays with The Pet Goats, whose debut album I previously reviewed. Berufskleidung’s self-released EP is utterly captivating; as melodic as it is raucous and as cerebral as it is primal, these four songs are a powerful statement of intent delivered with imperious assurance. This is a band with a very definite musical style and political vision who are in complete control of their work; there is no trace of compromise, equivocation or self-doubt.

Opening track “Naptime” is a mesmerising post-rock denunciation of the popular media – the “4th grade cranks who shine the apple for the teacher” – and the somnolent masses who slavishly submit to the prevailing “truth”. Built around a lip-quivering riff that sounds like LSD tastes, it immediately reminded me of UPCDOWNC and Slint’s masterpiece “Good Morning Captain”, though it’s not in any sense derivative. There is a dreamlike hallucinatory quality to the song reflected in the video filmed by Mangold as he cycled through Vienna.

Second song “Hipsters for Merkel” is more manic and direct; driven by a staccato industrial-punk riff, the song explodes into a chorus denouncing the aforementioned “hipsters” who venerate “the mother for all Europe”. “Loud is not Allowed” continues the Wire/Gang of Four-like machine-gun punk style; the song is a damning swipe at various fans of safe mainstream music – “trendy neighbours” of whom “Grandma would be proud” – who call for music to be turned down so they can “talk, talk, talk, talk, talk” while, one imagines, worrying about house prices and anti-social behaviour. Final song “Scheiß Drauf” – which translates as “Fuck” – is – hyperbole alert – probably the greatest song ever written; a supremely powerful riff gives way to a rabble-rousing “I don’t wanna be bored” chorus before a shearing guitar brings the song to a thunderous crescendo. Few escape the singer’s scorn here; singer-songwriters, acoustic guitarists, indie bands…all are branded purveyors of “loser music” in this intoxicating dismissal of restraint, self-indulgent equivocation and suffocating social mores. It’s music to crash cars to, and a peerless finale.

The band obviously don’t give a shit about causing offence and the lyrics evidence the writers’ gift for excoriating parody; but there is also rich imagery – particularly on “Naptime” – and the anti-establishment views never veer into adolescent cliché. The video for “Scheiß Drauf” succinctly captures the band’s irreverence and the instantly catchy and invigorating nature of their sonic assault. Clearly, somewhere beneath the gluttonous, staid veneer of mainstream Vienna, people are channelling anger and revolution into something uniquely iconoclastic and inspiring.