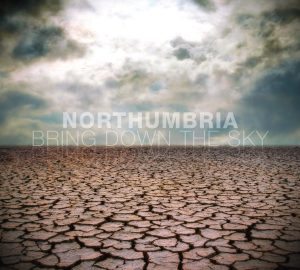 Released on November 21, 2014 via ConSouling Sounds

The next step to a successful debut album is often referred to as “the difficult second album” but it seems that is was not so difficult for Jim Field and Dorian Williamson.

Opening with a low rumbling drone, the new release by Northumbria, that beautifully succeeds All Days Begin As Night, slowly evolves into a soundtrack for an enchanting fairy tale. And although magical may be a word that some may find a bit too banal or common, this is the first word that came to my my mind when I started listening to it. Perhaps majestic is the proper word. These fantastical sounds that go with the title Bring Down The Sky come from the imagination of the “ambient metal” duo from Canada, whose sound has roots in ambient, drone, shoegaze and metal music. They take elements from each one of these music genres and blend them magically to deliver a music that is quite unique.

Bring Down the Sky, which is due out on ConSouling Sounds on November 21, is a collection of five songs and the sonic journey clocks in at approximately 45 minutes and it will drag you into a very introspective place. The five movements are not so different; they share the same mood and the whole composition looks like a big diamond and each face of it corresponds to a track, with its color and nuances.

Listening to Bring Down the Sky is almost like being in two places at once, one filled with light and happiness, and the other grave with terror and sorrow. It’s an awesome dichotomy, and one that repeats itself throughout the album. It happens then that the light of the opening ‘Transcendence’ gently dissolves into the following ‘The Ocean Calls Us Home’ that, especially, in the second part, takes all the possible tonalities of grey. But grey here means introspection and intimacy.

The calm after the storm of ‘Ostara’ is a kind of balm for troubled hearts in troubled times. ‘Ostara’ represents 10 minutes of intensely personal music, thanks to the duo’s blissful ambient passages, complimented by delicate, minimal electronics. The great delicacy of Bring Down the Sky, that is not only to the talent of Jim and Dorian, but also to the excellent mastering by James Plotkin, continues with the last two tracks of the album.

The sound of ‘The Silver Forest’ floats between enchanting dream-drone chords and subtle, yet textural, sonic ebb. Bring Down the Sky ends with the title track and it’s where the record achieves the top. The sense of peace of the first notes of the track is stunning as also the way they turn to be dark and deep. This song is the proof of the artistry of the duo reminding us that we definitely have to keep an eye on them.

The music of Bring Down the Sky is a careful balance of chiaroscuro elements, as if each track was a view to the horizon from the top of the mountain unencumbered by clouds, in all directions, and the whole album is very satisfying and exhilarating journey.