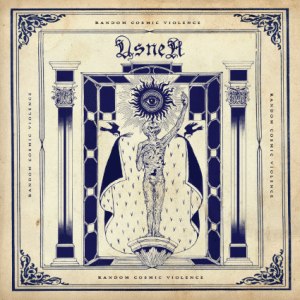 Released on November 7, 2014 via Relapse Records

Since the coming of winter (cue a picture of Ned Stark from Game of Thrones) I have been listening to a lot more sludge and doom metal. I don’t know what it is, I think it is the shortness of the days, the decaying light of the winter, or the cold snap of the air. So of course Usnea would be a great choice to listen too.

Usnea has only been in the business of crushing heads and ripping guitars since 2011. Since then they have put out an awesomely dismal self-titled LP and a split with the crust act Ruins. Hailing from Portland, Oregon, their music is a reflection of the dark cold forests of the Pacific Northeast.

Random Cosmic Violence starts off with a quiet haunting soundscape. It opens up to venomous growls and a slow grinding drums. The album is a slow hateful churning, having a tone of raw emotion and melancholy. Usnea is one of the few sludge bands that conveys deep emotions into their albums. Taking the listener on a journey through a bottomless abyss of misery and angst. As the album progresses it only goes deeper into those cold emotions. The songs are 12 minutes and longer but keep the listener entranced to further their journey into the dark hells which Usnea’s tracks describe. Each one with a personal flavor which is aphotic and cold. Harsh guitars giving unto clean reverberated rings, this album is a perfect storm of deep heavy sludge. ‘Random Cosmic Violence’ the title track of this album is a great mix and describes the bands vast range from ambient acoustic melodies progressing into a black metal fury.

Usnea is a great act, every musician in this band is super talented and it shows in the great recording of this album. Random Cosmic Violence is a great release to follow up their 2013 self-titled album. I would even go about saying this album might be one for the running for great albums of 2014. If traveling through a never ending bog of hateful sludge sounds like something you would be into, then get this album. You will not be disappointed. Currently, Usnea is on a limited tour in and around Oregon, if you have the chance I recommend supporting this band.