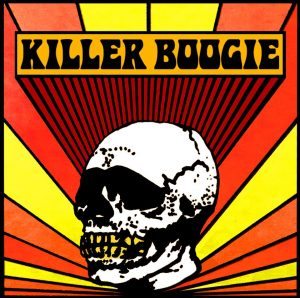 When told that a band has started featuring Gabriele Fiori (Black Rainbows) and Luigi Costanzo (The Wisdoom) it is a moment when your ears pick up and excitement is heightened. Two of the most exciting bands on the excellent Heavy Psych Sounds label finding time to release members to make another one. For those who know the label, you can only be excited.

With a name like Killer Boogie and promising a retro fuzz blast is the icing on the cake and all that is left is to hear the goods and hope that it is good. After all, side projects have a record for going awry. Well, does it work?

If we say that Detroit can be filed alongside Ty Segall’s Fuzz and still be able to hold its head high then you can rest assured that yes, we have another cracker here. This is an album of unashamedly retro fuzz filled rock with all the trappings of 70s excess put through a garage blender. It’s a raucous assault on your ear drums and doesn’t give up from start to finish.

We could select songs to talk about but what’s the point. They’re all essentially the same, a driving beat behind a fuzz fuelled bass allowing the guitars to scream naturally. Add full on vocals that have no pretences at all and you get the picture. Filter this through a vintage analogue feel and you have essentially a time capsule of fun.

There is diversity here too. ‘Silver Universe’ is a nice semi-acoustic dreamy piece for the most part and the brilliant ‘Cosmic Eyes’ takes a long detour into psych territory. Elsewhere it’s business as usual, but just like Fuzz it’s the melodies that worm their way into your mind. That, and the sheer energy.

Heavy Psych Sounds seem incapable of producing anything sub standard at the moment and Killer Boogie are yet another fine addition to a brilliant roster. Whether they have any staying power is another question and as the new Black Rainbows album approaches we must also wait for another release from The Wisdoom. No matter though as this is music of the moment and if this is the only release we get then so be it. It’s a perfect storm.