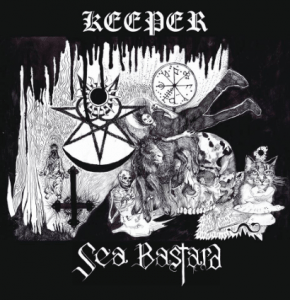 Hot on the heels of the excellent Goya/Wounded Giant split comes another slab of music which proves that this format is fast becoming a favourite of the underground and also one that allows a certain amount of artistic freedom as well as providing a great starting point for someone interested in the genre. This time it is Keeper and Sea Bastard providing the requisite thrills and you better be ready for an intense ride as this highlights the more crushing side of doom. These two songs will grind you down and exhaust you with their sheer colossal weight.

California sludge-merchants Keeper invite us into their world with the bone crushing ‘777’, a track which, over the duration of 14 minutes repeatedly pours on the depression, but in a way that is strangely invigorating. Having come on to the scene in early 2014, their first demo release MMXIV showed a band unwilling to compromise. ‘777’ continues in that vein, but with much more style and substance. Production values lift this above demo level and demonstrate a band who are starting to find their feet.

With a hefty dose of black metal style vocals, none of the ideology behind this genre is intact and instead we get something akin to Electric Wizard being put through the grinder as EyeHateGod watch on reproachfully. This is a track which elevates Keeper up into the pantheon of doom bands that are unwilling to compromise and are all the better for it. Let’s hope that they continue in this vein.

Brighton’s Sea Bastard in the meantime need no necessary introduction. Here is a band who have evolved from the more death metal orientated roots through to the tremendous Scabrous album, which introduced a more long form approach to doom. They continue in this vein with the excellent ‘Astral Rebirth’, which veers closer to funeral doom than they have gone before and as such is the heaviest thing they have released to date.

It’s impressive to see how Sea Bastard have evolved over their short period of existence and on the basis of this we can expect much more from them in the future. A dark, forbidding and crunchy sound, Sea Bastard take no prisoners with their sludge sound and may hold the mantle for being one of the heaviest bands around at the moment.

You’d be a fool to miss out on this split as it shows a genre of music which is unstoppable at the moment and also provides glimpses of what we can expect in the future. Their is no happiness here, just pure desolation and grind, but that’s how we like our doom to roll and in Keeper and Sea Bastard we have two bands unafraid to approach the future on their own terms. Another great split to start the new year off.