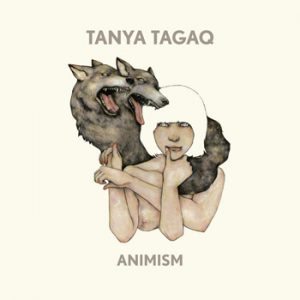 Writing for Echoes and Dust, I get exposed to many genres of music that are innovative and exciting. Sometimes, however, an artist comes along that I find difficult to categorize accurately. Tanya Tagaq is such an artist. Her Animism release from last year is unlike anything I’ve ever heard before. Tagaq is somewhere near the crossroads where experimental, traditional, modern, folk and improvisation music meet. Can you imagine such a place? There is a lot going on during this 50m, 11 song odyssey. The songs have many vocal and musical layers that require multiple listens to uncover.  Tanya Tagaq has woven her talent of Inuit throat singing into something that is fresh, challenging and sonically provocative.

The Canadian, who originally hails from Cambridge Bay in northern Nunavut, includes a curious and creative take on the Pixies’ classic ‘Caribou’. The song begins slowly with soothing tones over Tanya’s luscious and gentle vocals, which linger softly, floating like vapory ash from a fire. In true Pixies ‘loud/soft’© format the calm is broken as Tanya channels her inner metal soul with chilling repetitious screams of ‘re-pent!’. The melody is beautifully remade with Jesse Zubot’s edgy violins and crushing percussion by Jean Martin. It’s a lovely and uplifting cover. Not to dismiss Tanya’s ‘normal’ singing voice but the star of this album is the diverse sounds she creates with her throat singing. The energy, the vocal patterns, the diverse and eclectic harmonies, moans, growls, groans, yells, noises, beats… It’s simply an awesome showcase of what the human voice is capable of. Tagaq’s voice is an instrument used to convey emotion and/or atmosphere.

This is evident on the stunning and powerful track ‘Uja’. Musically the track has a catchy vibe, similar to some of Björk’s more upbeat material. A strong dose of stark percussion is joined by Tanya’s repeating a throat melody as some deep basslines drop into the mix. The result is a compelling cacophony of rich musical textures that crash and surge as they are driven forward by Tagaq’s passionate vocals. The vocals are similar in nature to jazz’s ‘scat singing’. There aren’t really words sung, the voice is used to create melodic vocal patterns and sounds. Throat singing is a unique and unconventional art form and may not appeal to everyone. If you are on the fence, please give ‘Uja’ a listen!

Animism continues to impress with the track ‘Umingmak’. It starts off rather traditionally with violin and layers of delirious throat-singing but ends with a surprising blast filled with what sounds like fuzzy guitar. The juxtaposition of traditional sounds clashing with modern noise within the same 4m track creates a stunning sonic shift. Tagaq’s music often sounds very experimental and improvisational. With most music that is foraging into new musical territory the balance between musical innovation and musical accessibility can be at odds. ‘Tulugak’ starts off with delicate, subtle vocal patterns and contextual raven calls which work well together. The second half of the track, however, loses me as the track spirals into series of scratchy violin jabs and increasingly agitated vocals.

Some of Animism is certainly challenging to listen to. Tagaq’s throat singing in ‘Fracking’ is forceful, grisly and deeply moving but it wouldn’t be a track I’d want to have in heavy rotation. The emotional impact of the track can’t be buried, however. It reminded me of some of Kronos Quartets‘ ominous and gripping material. In contrast the track ‘Fight’ hits the mark with the schoolyard “fight…fight…fight” chant over bombastic percussion with both rhythmic throat melody and ‘normal’ singing. The track ends with a badass bass flourish and some climactic horns which are simply dazzling! The range and diversity of material in itself is a reason for any serious audiophile to check out this album in its entirety. You might not like all the material but you should find something that resonates on Animism.

Tanya Tagaq has created an impressive collection of inspiring, thought provoking and wholly original material. Animism fuses traditional and modern music with a remarkable creative finesse that rivals some of the leaders in alternative music. It is an important work that sparkles with the soul of experimental music. Tagaq’s throat singing vividly and evocatively conjures a range of human emotions, both beautiful and grotesque. Additionally, Tanya’s dynamic voice often aptly serves as a melodic instrument with hypnotizing skatted vocal patterns. If you thrive on rewarding, experimental music then you will discover a vast aural treasure trove with this release.