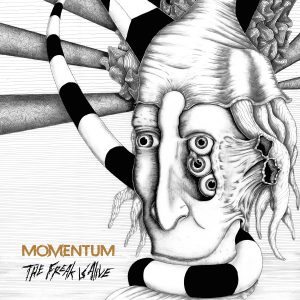 There’s something to be said for the willingness to change. Some bands get stuck in the mud, developing a signature sound and then finding that they are unable to shake free of it. Iceland’s Momentum is not one of those bands. The band technically started in 2002 as a one-man black metal act called Afsprengi Satans. The first transformation came a year or two later as drummer Kristján Gudmundsson began to add musicians that could help play his music in a live setting. Those early sounds ranged from black metal to death metal, and the Momentum moniker arose out of the realization that this wasn’t the same band that Gudmundsson had started.

As the band has progressed, from their first recorded demo Death to Christianity to their newest release The Freak is Alive, they have mutated into a three-piece progressive sludge/doom act. Kristján Gudmundsson is still playing drums, with bandmates Ingvar Sæmundsson and Hörður Ólafsson handling guitar and bass duties, respectively. With tinges of post-metal and deep clean vocals that are reminiscent of some kind of Gregorian chant, Momentum certainly does not rest on their laurels.

The Freak is Alive is an album I picked up simply because I thought both the title and album artwork were a little ridiculous. I had no prior experience with Momentum, but I was immediately taken with Holaf’s vocal stylings. The album’s lead off track ‘Bury The Eyes Once Gold’ is one of my favorites, and demonstrates the range in Holaf’s voice. His howls are intense and full of emotion, while his clean singing is low and haunting. The track starts off heavy and sets the tone for the rest of the record. ‘Between Two Worlds’ has opens with a clean, melancholy guitar progression. Other standout tracks include ‘Gauntlet’, a six-minute journey that makes use of a sitar, and ‘Creator of Malignant Metaphors’ with its intricate guitar lead. The record has a gloomy, heavy feeling that is well represented in the first two tracks and carried through final seconds of sound. Whether the guitars are clean or distorted, whether the vocals are clean or howling, The Freak is Alive stays heavy and a little sad.

Momentum makes good use of odd time signatures, strings and sitar, and melds progressive and post-metal with sludge in a really interesting way. My only issue with the album is that by the time I get to the final two tracks, ‘Undercover Imagination’ and ‘Depth of the Whole’, the melancholia is played out. The last two tracks don’t grab your attention the way the earlier songs do. It leaves the ending of the album weak. Overall though, I appreciate and enjoy what Momentum has done on this record. I’m very glad to have discovered this treasure from Iceland, and I certainly recommend you dive into their previous albums. The Freak is Alive is out now on Dark Essence Records.