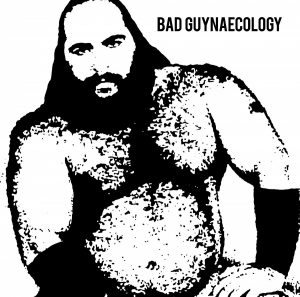 Sometimes metal is serious, and meaningful, and should be taken seriously and examined for all its meaning. Sometimes there’s a band called Bad Guys that says fuck all that shit. Bad Guys is a gritty, dirty four-piece rock’n’roll band from London. The band plays simple sludgey stoner rock with big riffs and an even bigger dose of absurdity. Vocalist Stuart London’s gravelly vocals and his story-telling stand out on an album full of fun, raunchy guitars and driving drum beats. Their new album is called Bad Guynaecology. The title should tell you all you need to know about these…bad guys.

Bad Guys may offend you, but I think they’re absolutely hilarious. In each track on the album, London’s lyrics tell a zany and often inappropriate tale involving petty theft, racy women, and crashing an RV into someone’s house. The record starts out with ‘Crime’, a story of a child stealing a Tonka truck from Toys R’ Us because his parents would not purchase the toy for him. This story, like most of the album, is told in the first person. We’re unsure if this particular bit of larceny is a part of Stu’s past or not. ‘Crime’ is followed by ‘Prostitutes (Are Making Love In My Garden)’, which again, may or may not have actually happened to someone in the band. I’m fairly certain they would own up to it if you asked them.

The album continues in this vein, just raucous fun and outlandish stories told over thick riffs. The music isn’t especially memorable, but I don’t think it was meant to be. Bad Guys would rather get drunk and smash stuff with you. The second to last track, ‘Motorhome’, has Stu yelling “I will drive my home into your front room while you watch TV”. I laughed and laughed, but I also wouldn’t put it past him. The final song ‘No Tomorrow’ is too long, on purpose, because fuck you. It clocks in at almost 12-minutes long and is just a fuzzed out mashup of stoner riffs.

Bad Guys have released a giant sounding record that immediately makes itself known and doesn’t let up. It’s not going to blow your mind, but it will blow your hair back and put a smile on your face. The dudes from the band are also hysterical. Richard Collins had a good time interviewing them last month. If you’re looking for a good time, go pick up a copy of Bad Guynaecology.