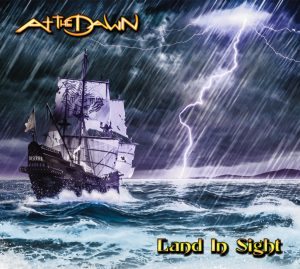 Released on April 14, 2015 via Bakerteam Records

Founded in 2011, At The Dawn are one of the most recent additions to Italy’s grand contribution to power metal. Though their second album Land In Sight is heavily inspired by the genre’s founding acts it has far more than nostalgia to offer. By channelling Stormwarrior’s fiery delivery and Blind Guardian’s gift for storytelling At The Dawn have shown themselves to be among power metal’s most eligible heirs.

There’s a lot of Helloween and Iron Maiden to Land In Sight – it’s definitely an album that’s underpinned by inspiration from classic metal. However, At The Dawn are not a retro revivalist band dedicated to taking the past to eleven in the same way as Steelwing or White Wizzard. The verses of ‘Through a Darkened Sky’ are bridged with flamboyant neoclassical Malmsteemisms, but it’s an otherwise efficient beginning to the album. Similarly, the guitar solos scattered throughout ‘Ladyhawke’ are flashy enough to be impressive without ever lasting long enough to overstay their welcome. This is a common theme throughout – At The Dawn have done an excellent job of keeping power metal’s majestic sound while trimming its excesses to leave something sleek and beautiful.

Stefano De Marco’s voice is the heart of At The Dawn. He has a lot of power metal elder statesman Fabio Lione’s bright and measured tone, most obviously in Rhapsody of Fire flavoured microballad ‘The Offense’. As well as being a great vocalist, his charismatic delivery breathes colour into the album’s characters. The lyrics throughout are really entertaining stories of myth and adventure, particularly in the Game of Thrones inspired ‘A Crow With No Wings’. This is a first person narrative of a Night’s Watch brother saying his vows, even managing to adapt an extract from the Watch’s pledge into a powerful chorus.

At The Dawn don’t need to rely on borrowing George R.R. Martin’s words though – ‘Rosamund’s Suite’ (made up of ‘Ouverture’, ‘The Offense’ and ‘The Revenge’) is a vivid retelling of her story. ‘The Deserter’ is another high point – offering a nuanced view of a soldier who abandons their comrades to escape the bloody stalemate of trench warfare. Land In Sight‘s storytelling falters and feels a little generic when it ventures outside of this kind of focused, personal narrative but it is always a significant part of the album.

Land In Sight is well worth your time whether you’re attracted by its inspired version of power metal or the engaging stories it tells. At The Dawn unashamedly stands on the shoulders of their predecessors, but their inspirations are enriched with their own ideas, creating something which is impressive enough to stand out.