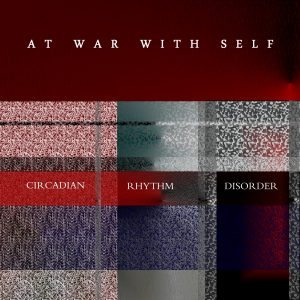 Marco Minnemann’s Normalizer II Project first hit our ears as far back as 2010. The multi-instrumentalist had recorded a 51 minute drum solo in a single take, and for the project he invited musicians from all over the world to come and record over it. This lead to some great works such as Trey Gunn’s Modulator and Mike Keneally’s Evidence of Humanity, and now in 2015 we have Circadian Rhythm Disorder by At War With Self. Glenn Snelwar (former Gordian Knot guitarist) here plays mandolin, keys, fretless bass and acoustic and electric guitars over Minnemann’s solo in what ends up being a very intense ride.

These 51 minutes are split up into 24 segments, and the first few tracks really set the tone for the journey we are about to take: brutal metal riffs sidle up against acoustic slide guitar (‘Slate Wiper’) and strings (‘Seeds of Doubt’), or devolve into beautiful piano pieces (‘Seeds of Love’). Over these tracks, and the entirety of the album, Snelwar makes a concerted effort to write reactively to Minnemann’s drumming. It makes sense: in order to sound coherent over a drum solo, the music demands you to be there in the moment. And that is what is so impressive on Circadian Rhythm Disorder – Snelwar spent over four years writing to this drum solo, yet the music flows as if they are in the same room together.

That is not to say there are not moments of over-production (as one may expect after spending such a long period on the solo), but for the most part the music carries an immediacy and freshness. ‘The Mirror’ is a great example of this. The track begins over a relatively simple riff, letting Minnemann’s drum take the spotlight until halfway Snelwar rips into a solo that latches on to each individual snare hit. Then they both completely let loose in a frenzied assault. It’s a definite highlight of the album.

However, it’s the album’s multi-part sections are where we have some of the most interesting work. A lot of the tracks are 1-2 minutes long, so the three-part ‘Shards’ and two-part ‘New Life’ have a lot more room to breathe and build. ‘Shards’ has a mixture of mellotrons, classical acoustic guitar, piano and showcases some great fretless bass playing – a brief and refreshing sojourn from the metal riffery that gives the album so much of its thrust. ‘New Life’ acts similarly but has flamenco guitar building to an epic crescendo of guitar harmonies and ludicrously powerful drumming.

Although I have been focusing on individual tracks, make no mistake: this is one, continuous 51 minute piece of music. And not one that brings back many themes or recurring motifs like a typical concept album would. This may narrow the audience down to those who already are fans of Minnemann or Snelwar and are willing to listen in such a fashion, which is unfortunate as the piece is not as intimidating as it sounds. Snelwar keeps the music continually engaging, utilising his multi-instrumentalism to employ many different textures to keep the listener interested. Like the solo the music is written over, it perpetually pushes forward, exploring new territories almost every minute.

Circadian Rhythm Disorder is an ambitious piece of work, and the amount of time and effort that Glenn Snelwar has put into it really shows. It may only appeal to existing fans of either artist, but they will not be disappointed.