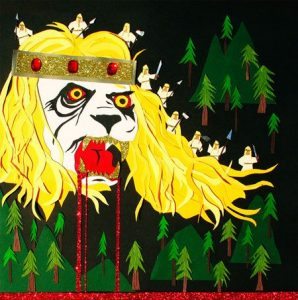 It was a bold move for Big Business, after suddenly finding themselves without label backing following the sad demise of Hydra Head, to go ahead and self-release Battlefields Forever. It was their first full length in 4 years and came out at a point where they’d perhaps been forgotten about following the almost decade long period they spent wilfully subsumed into the Melvins fold. To be fair when Seattle’s finest ask you to join their band it’s not an invitation you can turn down and the run of records they contributed to, from A Senile Animal to The Bride Screamed Bloody Murder, count some of the band’s best in their 3 decade career. But there was a feeling, particularly following the slightly wayward oddities that made up 2009’s Mind the Drift, that their extra-curricular activities had led to a case of arrested development. So, on unsure footing with a changing line-up (after briefly becoming a ‘power quartet’ with new guitarist Scott Martin the other six stringer Toshi Kasai left), starting from scratch must have seemed a little daunting.

Which made it a pretty good time to put out their finest record yet.

Released on their own Gold Blade records in 2013 Battlefields Forever never officially made it to Europe, though their web store was able to get vinyl copies out here at a pretty decent rate. Nevertheless French label Solar Flare Records have finally done the decent thing and picked it up for a bigger run. Which is as good an excuse as any to revisit the record – and by golly does it deserve it.

Battlefields Forever sees Big Business rediscover the intensity of their earlier work, full of torrential rolling drums and heavy distorted bass wielded with both force and subtlety. They play like they’re a two piece again, which gives the guitars space to add further brawn and texture to the riffs. They had guitars bolstering their sound on Mind the Drift as well but whereas Kosai was all about little melodious flourishes and atmospherics Martin focuses on thickening the sound, making them feel like a complete unit for perhaps the first time since they were a duo. Jared Warren’s surprisingly sonorous bellow completes the picture, riding atop the maelstrom – one of metal’s more underrated vocalists – he may have a narrow range, but it’s a voice as silky as it is powerful.

With everything seemingly clicking into place they sound effortlessly confident from the off – opener ‘Chump Chance’ rumbles into view and gradually picks up pace like a juggernaut on the highway. From there the record locks into gear for a mostly high tempo stoner road trip. ‘No Vowels’ and ‘Trees’ both boast addictive vocal hooks amidst the ceaseless barrage. The one-two of ‘Doomsday, Today!’ and ‘Heavy Shoes’ feature impressively lush vocal arrangements alongside ceaselessly grinding riffs. The only moment that comes close to the more experimental numbers on Mind the Drift is the closer ‘Lonely Lyle’, which is something akin to a sludge power ballad. It’s nearly 10 minutes long and it sounds a little like a more muscular version of The Wall era Pink Floyd. It starts with just vocals and some quiet bass and swells into a fuzzy behemoth with some straight-up anthemic vocals and soaring guitars. It’s every bit as brilliant as it is ridiculous – they sound just as confident aping some classic rock tropes as they do blasting out stoner-sludge.

And that’s the byword for Battlefields Forever – confidence. Whilst they’ve always been a band that probably shouldn’t work on paper – yet almost always have – here they make being Big Business sound like the most natural thing in the world. Alongside this reissue they also released the 2 track online single True Gold, suggesting that there may be more to come from them not too far on the horizon. Which is something we should all be thankful for – whether they’re going it alone or have label backing the world would be a poorer place without them.