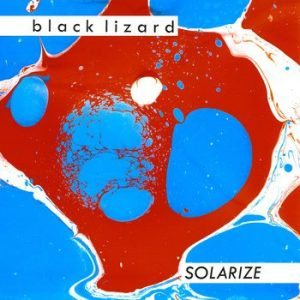 Sometimes it’s difficult to listen to an album without hearing all it’s requisite influences. It seems to cast a shadow over what you are listening to and you are forever comparing it to what you have heard before. It’s a particularly unfair way to review an album and you have to struggle to find any merits of its own to latch on to. It is therefore somewhat of a surprise that, on hearing the new Black Lizard album, Solarize, that this assumption is turned completely on its head.

Here is an album that is chock-ful of references to a very ’90’s sounding psych and it sounds like a composite of Screamadelica, The Charlatans Some Friendly and a long lost Spiritualized album. It’s there, plain to see, but you know what…by the end of the first song ‘Everything and Nothing’, you just don’t give a damn. Black Lizard have found a way to wear their influences on their sleeve and still enrapture you with their sheer audacity and excellence.

Maybe ‘Everything and Nothing’ is an apt opener as you have it all, yet nothing new. Solarize continues to get better though and as the songs flow by you find yourself enraptured in their world and walking around with a big grin on your face. Their are fist-pumpers here, there are gorgeous psychedelic freak-outs made for the dance-floor and there are moments of skronky experimentalism that fry your mind leaving you begging for more.

Whilst the songs are a tad shallow and the essence is simply about a feeling, you can’t deny that the feeling you get is one of elation and delight. Like a souped up E on psychedelics, they stick firmly to a rock and roll path but without sinking into crass commercialism such as Crocodiles do. It’s an album completely out of time yet so in tune with the times.

It’s the little moments that make it though like the discordant sections or the freak out jazz sections. They are few and far between but serve to act as a break before thrusting you once more onto the psych dance-floor with another loud anthem. By rights this band should be huge, and in another time they would have been. Who are we to second guess though and maybe they have hit on a zeitgeist and we could be due a return to the heady days of the second summer of love. We can dream, can’t we?