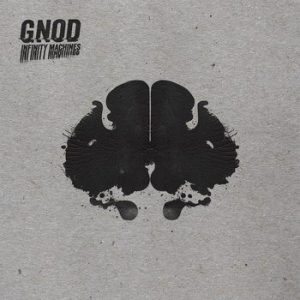 Released on April 20, 2015 via Rocket Recordings

You never quite know what to expect with Gnod...or is that gnever gnow? One of the most mysterious and innovative bands of the last few years, they’ve covered the gamut of the music spectrum from dark techno, twisted psych and pretty much everything in between. Now, with their new triple album, Infinity Machines they once again reinvent the wheel and take everything you have ever known and spin it into something completely different.

At first list it’s all a bit disconcerting. Gone are the extreme bouts of noise and in its place is a much more measured, ambient sound. Seemingly taking its cue from a jazz viewpoint, the shades of Miles Davis (in particular Bitches Brew) and Sun Ra poke through the ethereal, industrial music, opening up new realms of possibilities within the songs. In fact scratch that, these aren’t songs in any sense we know, these are more collages of sound cobbled together to create a quite disturbing whole.

As a triple album the whole thing can seem quite disconcerting and with a number of tracks stretching out over the seventeen minute mark you really do need to set some time aside for it. Once you do you will find yourself adrift on a journey unlike any other and may even question reality itself by the end of it. This is psychedelic jamming on an extreme scale although the word psychedelic here is not in any way meant to link itself in with a psych genre. This is genre-less stuff and belongs in a room by itself.

‘Control Systems’ sets some sort of stall out as its jazz inflections lull you into a false sense of security before thrusting you into space with it’s ambient passages. For all its weirdness, it’s possibly the most grounded track here though and remains resolutely accessible if a little mind-bending. After this things gets decidedly weirder.

The Gnod of the past who would bombard you with white noise seems to have disappeared and ‘Collateral Damage’ is akin to the after-effects of listening to all that old stuff. As the pieces fall apart around you, the spaces between the notes stretch out into configurations you can only imagine. It’s almost difficult to work out why they are doing what they are doing and this feeling carries on through ‘Desire’ and into ‘The Importance Of Downtime’.

This latter track serves as an ambient centre-point to the album and drifts by with barely a heartbeat being lifted. Strange noises drift in over the lowered tone of the synths evoking a strange pattern of brain noise which does wonders for the mind if you are seeking to lose it. It almost falls into the trap of being too long and for such an ambient piece is quite heavy going at times.

Things do pick up though and it is on the next track ‘White Privileged Wank’ that you realise the importance of the last track. As a piece, the album works to creep up on you and play tricks on your mind as it lulls you into its grasp. Gnod play around a bit now and we start to get some short slabs of industrial noise which we are used to but these are more of an echo than an in your face melting sound-scape. It’s almost as if you are cast adrift on your memories whilst drifting off to some lunar landscape.

‘Spinal Fluid’ continues in this vein gathering momentum whilst at the same time letting loose of any reins that might be left. This is all the starting point though for the final track ‘Infinity Machines’ which revives the skronkiness of the opening track and brings us full circle once again albeit with a few less brain cells.

Listening to this album is like having your brain removed piece by piece, washed and then put back the wrong way. As a piece of music it is peerless in that thee is nothing quite like this out there, as a piece of art it may well mark a turning point for the band in that it will gather critical appreciation from a wider circle. As a Gnod album it’s long but brilliant and shows a band who are unwilling to stay in one place for too long. Infinity Machines may well turn out to be regarded as their masterpiece once the dust has settled and deservedly so for the sheer ambition and scope that the have introduced into their sound. And all that before you reach the bonus of having their live performance at Gorilla included just to send those last few bits of brain scuttling for shelter. Long live Gnod.