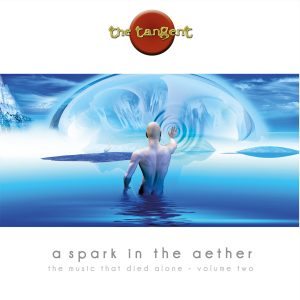 Retro proggers The Tangent have returned with A Spark In The Aether, their new album featuring six songs with lengths from roughly four to over 22 minutes. As usual with this band, the music is a mixture of nearly everything classic progressive rock has to offer, be it the sounds of Yes, Genesis, Emerson, Lake & Palmer, Camel, Soft Machine, Gentle Giant, or King Crimson. Still, the music also has a few AOR and straightforward Canterbury and jazz elements, especially when it comes to the melodies (Toto-esque harmony vocals) and instrumentation (saxophones and flutes played by the great Theo Travis).

Basically The Tangent’s music is very enjoyable as the songwriting is superb: there are many different musical details in each song, no matter how long or short it actually is. Same goes for the fantastic musicianship. A nice contrast to this is the sparse production which seems to simply reveal what was actually recorded live in the studio, instead of adding lots of effects afterwards.

Even more interesting for the prog die-hards are the hints at and jokes about prog music in general, mostly during ‘Codpieces & Capes’. This continues with Aftereugene’, one of The Tangent’s “After” songs which are homages to classic works, this time being Pink Floyd’s ‘Careful With That Axe, Eugene’.

Nevertheless – and as it always is the case with The Tangent’s music – A Spark In The Aether is an album for retro progressive rock lovers. It is music full of memories of the old 70s days and that is what it’s mainly about. In short – and slightly paradoxical – it’s all about going back progressively!