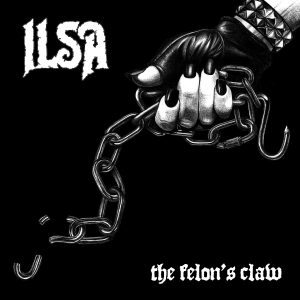 I mean that in the best possible way, of course, as their particular brand of pummelling crust-meets-sludge-meets-death is a combination of just about all my favourite things about metal, all presented in one putrescent package. With much of their previous output sitting somewhere between the down-tempo murk of Domination-era Morbid Angel and Iron Monkey’s more breakneck tracks, excitement was high for the arrival of new album The Felon’s Claw. It is just as horrible as I’d hoped.

Vocalist Orion’s death-rattle rasp proclaims the sentence, instantly damning you to the darkness in opening banger ‘Oubliette’. The everything-in-the-red mix creates a claustrophobic atmosphere that, given the title, is no doubt intentional, with a ripping solo around the halfway point that is straight-up demented. They cram more energy and filth into these opening 3 minutes than most bands manage across a whole album.

The more morbid listener may recognise ’25 Cromwell’ as a reference to serial murderers Fred and Rose West, it being the address at which they conducted most of their killings. That their dwelling has since been demolished, with every timber burnt to ash and every brick crushed to dust, speaks to the sheer evil of the acts committed in that house. The track itself is just as depraved and violent as its subject matter. Drummer Joshy pounds his kit like he’s in a bar brawl with it, each bass drum blow like a fist driven into flesh, while the hyper-distorted riffs have all the impune swagger of the uncaught killer. You can keep your songs about Satan; this is the sound of true evil.

‘Smoke Is The Ghost Of Fire’ recalls the zombified lurch of many tracks on their previous LP Intoxicantations, the chugging riff thick and black as tar, while Orion’s multi-tracked howls are guaranteed to send shivers up the spine. The mysteriously-titled ‘Buried In The Bedrock And Concrete Of Our Cities’ doesn’t cite any specific horror, which is almost more terrifying. The distortion is so thick in the opening bars that you can barely discern if there’s a riff underneath it all, but some wonderfully organic blasts and kick-drum work offer a recognisable rhythm to wreck your neck to.

Dirt and discordance announce ‘Pandolpho’, before a raucous beer-crushing, horn-throwing passage twists it into one of the catchiest tracks on the record. However they don’t maintain this momentum, with an extended doom plod around the halfway point. This Frankensteining of the fastest and slowest sections of The Felon’s Claw together seems a bit incongruous, but that’s not to say that each half of the track isn’t fucking awesome. Following track ‘Pass//Out’ demonstrates a more effective use of dynamics, with the band switching seamlessly between skin-crawling atmospherics and fast-paced bludgeoning.

The prowling bass of ‘Enter The Void’ begins a decrepit dirge, which seemingly slows with every second until it dispenses of rhythm entirely in favour of feedback, before the opening riff returns, even deadlier than before. By contrast ‘Armstrong’s Mixture’ is as explosive as its titular chemical compound, an unrelenting crusty ripper that’ll leave your head either spinning or banging.

The interminable torture of ‘Katabasis’ feels like a slow descent into madness, the ever-decreasing tempo and smog-thick riffage continuing the dark atmosphere of the opening track. The fact that the track is named for the journey down into the Underworld taken by a number of mythological figures, from Gilgamesh to Orpheus, and even Christ, will feel appropriate by the time it draws to a close, and you are returned, forever changed, to the land of the living.

The suitably jagged ‘Song Of The Saw-Blade’ is as close as Ilsa come to anthemic, the Swedeath vibe of the music underpinning Orion’s repeated roars of the track’s title, making for a discernible chorus of sorts. By the time the final repulsive notes ring out, you’ll feel in need of a hot shower. Possibly even some psychological counselling.

The Felon’s Claw might not be a huge progression of Ilsa’s signature sound, but the fact that they have a sound all of their own is a rarity in modern metal, and this album sees them hone their skills to the point of deadly proficiency. A terrifying trip through the darkest depths of death and doom.