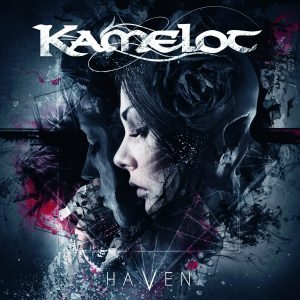 To understand Haven‘s importance, you need to remember that Kamelot‘s previous album, Silverthorn, came from a time of crisis for the band. Following the departure of influential vocalist Roy Khan it was unclear how much the band would change with Seventh Wonder’s Tommy Karevik in his place. While Silverthorn did an excellent job of proving that Kamelot were still the band they had been before this trauma, Haven has allowed them to move beyond the expectations placed upon them.

Someone in Kamelot has been listening to a lot of Muse – their symphonic rock is easily as important to Haven‘s lush orchestration and subtle electronic influences as anything heavier. Half of the song titles could have been pulled from Matt Bellamy’s conspiracy laden mind too as Kamelot have centred this album around a dystopic vision of the near future.

Haven also shows heavy influence from musicals – ‘Under Grey Skies’ and ‘Here’s to the Fall’ could appear on Broadway unaltered and every song on the album builds to a perfect chorus. These memorable climaxes are the heart of Haven; Kamelot haven’t abandoned their heritage, but their focus has shifted towards making a catchy and accessible iteration of their style.

Kamelot use a little more force in ‘Liar Liar (Wasteland Monarchy)’ and ‘Revolution’, with their heaviest moments supported by Arch Enemy vocalist Alissa White-Gluz. Even here Haven is not allowed to become abrasive – Alissa is muzzled by a production that smoothes the harsh texture of her screams and gives her clean vocals far more prominence. It’s Amaranthe’s use of growls to pull you from hook to hook rather than Arch Enemy’s aggression, which rules her inclusion in this album.

Speaking of voices, Tommy has more than proven himself a worthy frontman for Kamelot. His powerful but gentle tone is central to the theatrical side of Haven. He still sounds pretty similar to Roy; down to details like the way his voice quavers in the choruses of ‘Insomnia’ and how he slips into and out of falsetto during ‘My Therapy’. Even so, Tommy owns his performance so well that this sounds like part of Kamelot’s palette rather than an echo of his predecessor.

Despite its concept, Haven is not the kind of aggressive statement you might expect from a metal band. Even more so than Nightwish’s latest, this is a symphonic and theatrical album first, which uses metal as scaffolding around its series of incredibly catchy choruses. If you can accept that Idina Menzel ‘Let It Go‘ far better than Betraying The Martyrs ever could, but still love metal, this is the album for you.