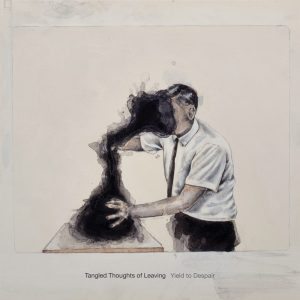 Yield to Despair, the new album from Tangled Thoughts of Leaving, opens with a cacophony of crackling noise, growling bass and pounding drums.

It’s an abrasive opening to a difficult and often gruelling record. The progressive flourishes that helped this Perth powerhouse to breathe new life into the glittery corpse of post-rock on their debut full-length album, Deaden The Fields, have now been repurposed to create an atmosphere that is as suffocating as it is foreboding.

There are shades of light, to be sure – as the murky grind of ‘Albanian Sleepover Part 1’ departs, a delicate piano flutters in the void, providing listeners a brief reprieve to survey the damage done to their psyche – but the chaos is quelled only momentarily, as the song slowly builds in a frenzied finale.

‘Part 2’ begins suddenly with a subdued, but rapid-fire drum-and-bass figure. The theme from ‘Part 1’ is elaborated on; manipulated; returning once more in warped form. The tempo speaks to a hurried panic, like townsfolk gathering their dead in the eye of some terrible storm. But we, the audience, know that since the film has just begun, the worst is yet to come. The track soon breaks down into a mess of howling synths and guitar drones, delays oscillating madly in the background. We are abandoned in the midst of some mechanical nightmare. The effect is legitimately terrifying.

The theme returns, limping and defeated, to dig itself a pit deep in the earth; a final, damp resting place for its weary bones. Violent bursts of rapid-fire drums batter the listener. As the noise finally gives way, a field recording lays an unsettling haze over the quiet; the sound of a metal shovel scraping against the earth; of someone slowly moving through dry brush while cicadas scream in the distance.

This is the genius of Tangled Thoughts of Leaving; a group of incredibly adept and flexible musicians who create intricately layered compositions of pure terror. What makes them so effective is the incredible attention to detail given to each track; the inter-woven textures; the progressive song structuring; and the versatile use of each instrument. This is brutality in a nuanced and intelligent form.

As a whole, the album has a post-apocalyptic feel. This partly due to some of the synth sounds selected, and faint echoes of Earth’s sparse, spaghetti-western styled guitar work, but also due to the sheer scale of the destruction depicted. Like their excellent 2013 EP, Failed By Man and Machine, Yield to Despair takes listeners on long and varied journey that can only be described as cinematic.

With their new album, Tangled Thoughts of Leaving have thrust themselves into difficult territory, leaving behind safer and more popular styles to pursue a darker vision. With such a highly developed style, it is difficult to compare the group to any band that has come before them. They are perhaps evocative of experimental “post-metal” band Neurosis, who forged an uncompromising, deeply textured and utterly unique sound to claim as their own two decades ago. The integrity and dedication with which both groups have carried out their bleak mission is a source of inspiration to many.

Tangled Thoughts of Leaving have proven, once again, that they are one of the most uniquely talented bands that Australia has to offer. This album is a perfectly formed artistic statement. The listen is not an easy one, but it is deeply rewarding for those who can stomach sonic oblivion. Under its immense weight, we must all yield to despair.