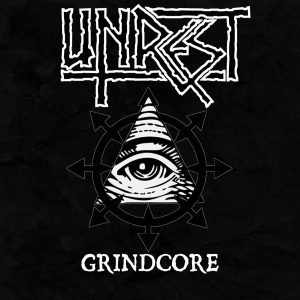 In recent times I’ve been a bit out of touch with regards to extreme music releases, for about the last month or so, but that all changed when I got into a release, funny how that works. You need one release and you’re back on track.

With regards to 2015 there hasn’t been too much to report on the grindcore front, not that I have been aware of anyway, after what seemed a promising start with a new Napalm Death record, I have resorted to finding missed gems from last year, which makes one realize how much music is out there.

So, the USA has had some incredible grindcore bands all across the country, coast to coast with the dudes down in the Gulf Coast making the most noise in recent years. However, that’s about to change, because deep in depths of the Philadelphia metal underground something has been evolving over recent years, above and beyond just a tribute to the grindcore legends of old, mastering their instruments and craft. A group by the name Unrest recorded an album in 2014 and has only been released recently and judging by the band’s name you can start to imagine what the soundscape is like.

Their new record is simply titled Grindcore and if you were wondering, yeah it’s pretty legit. This isn’t their first record and hopefully won’t be their last. Anyone familiar with the sub-genre that is grindcore can name some pretty heavy hitters such as Nasum and Napalm Death. Well, you’re in luck because these dudes basically worship those bands as the influences from both groups are pretty evident throughout their discography, but influence only gets you that far before the band takes that next step.

They’ve been able to do that by creating something that comprises of everything from speed, to groovy rhythms, to sheer grinding madness whilst maintaining a bit of a death metal edge. It isn’t as abrasive as one would expect, which lends itself to easy listening for the most part, but that could be attributed to good recording and mixing. Don’t let that trick you into a false sense of security as it is very much a grindcore record through and through, which is what makes it so great!

The tempo varies nicely and listening to something as good as this is also effortless and the lyrics speak volumes on the socio-political side of things, which I find very intriguing. To me, this is pretty much the perfect grindcore album and captures everything you’d want in a grindcore record without making it painful to listen too. I would highly recommend Unrest – Grindcore to any and all extreme music fans.